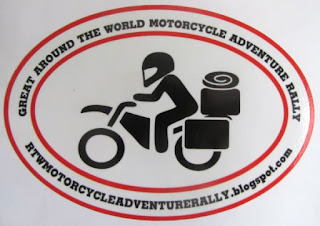 (Copy above is of the RTW Adventure Motorcycle Rally sticker)

Richard C. Livermore and Dr. Gregory Frazier conjured a motorcycle ride around the globe, Livermore doing his first and Frazier attempting a sixth.  “Dr. G” wanted the adventure to be different from his previous five.  Livermore wanted it to be different from the 1,000’s of others that had been done or were currently underway by motorcyclists over the previous 100 years, but "soft and easy."  Both wanted fun, incorporating adventure and not a canned or guided tour where their adventure was defined by what organized tour company personnel thought was adventure.  Finally, each wanted their “‘round the world” motorcycle journey to be at their leisure, with breaks between continents and extreme adventures for rest, repairs and reflection, much like a pit stop during a rally race.

When designing the Great Around The World Motorcycle Adventure Rally, Livermore and Frazier also had to factor in how much time each had, funds available, and the maintenance of personal relationships like those with family, friends, children and grandchildren. Additional factors included which motorcycle or motorcycles would be best for their proposed route.  Riding styles were also factored in the global adventure matrix, as was carrying capacity and costs associated with transporting laden motorcycles across large expanses of salt water or over and around countries where they could not easily secure transit or tourist visas or places they did not wish to pass through as motorcyclists.

The eventual design of the Great Around The World Motorcycle Adventure Rally started with a 21st Century form of the Grand Tours popular between 1660 and the middle 1800’s.  These earlier tours were an educational rite of passage for young well-heeled men, or some of humble origins who could find sponsors.  They were mostly Europeans who made journeys at the end of their schooling before they moved into their life as a mature adult.  A Grand Tour could last from a few months to several years, there being no fixed time during which the journey needed to be completed. Livermore and Frazier saw their Grand Tour comprised of two older single men, one humble and not so well-heeled but with jobs to allow savings, the other well-heeled and claiming not to be concerned about the costs and each having already tasted a half century of life and one having seen much of the world.  Frazier’s role could be likened to that of the Grand Tour Cicerone, but closer in the humorous definition to a beer sommelier description than that of an organized event guide. Livermore emphasized, "I don't want this to be about money, I've got the money." Frazier said, "Being single means we're free, but one of us is going to have to grow some bigger stones to not be so fearful of being away from the security of their home and the easy life money can buy." 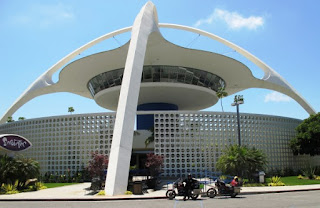 
The first segment of their ride around the globe was done, in part, as a celebration to commemorate the first motorcycle ride around the world in 1912-1913 by Carl Stearns Clancy and described in a book published about that early adventure titled MOTORCYCLE ADVENTURER.  Their crossing of the North American continent 100 years later was chronicled as part of The Clancy Centenary Ride at www.horizonsunlimited.com/clancyride

After Livermore drove off the road in Minnesota and crashed, Frazier said, "You need to back off the hubris and quit being a phone and GPS zombie when driving.  You were lucky today. Toss the hubris and remember what Dirty Harry said in the movie, that 'a man has to know his limitations.'  From what I've seen of your motorcycle driving skills so far, you aren't a very good driver." 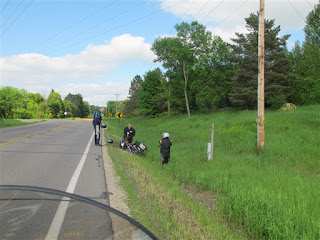 (Photo taken by Gary Walker, as Livermore, nicknamed "Cheetah" because of how he looked when driving and reading his coveted GPS, hunched over looking like an ape peeling a banana held between its feet, diddling itself or as one of the Irishmen said, "pulling his wire." Livermore made about 45 degrees of this 90 degree curve and then crashed.  One of the group following him said it was "The Day Cheetah Ate Grass").

Livermore and Frazier made an extended pit stop in Florida after recording nearly 10,000 miles around North America.  Much like a car or motorcycle rally pit stop, each rider refreshed themselves while their motorcycles were outfitted with new tires, batteries and windscreens cleaned.  The next leg of The Great Around The World Adventure Motorcycle Rally was to be through and across the continent of South America. 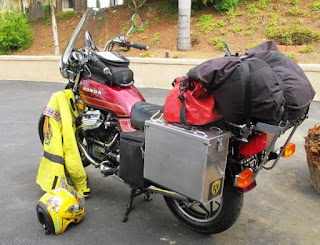 One of the adventure motorcycles prior to going into extended rally pit stop #1.  Half the luggage pictured here was discarded after it was determined to be unnecessary, and the Aerostich riding gear and Nolan motorcycle helmet were each upgraded to newer and fresher models.

Like during the Clancy Centenary Ride, motorcycle adventurists, travelers of all kinds and interested parties are invited to join the Great Around The World Adventure Rally team members as they circle the globe.  It appears to be a wild adventure.  This site will be updated occasionally to describe where they have been and loosely planned routes as well as tentative short and long term pit stops.

As one of the volunteer support crew said, "The rally isn't supposed to be about keyboards, social media and tap-tap-tap after a day of motorcycling, it's about their pursuit of a conjured two wheel motorized global loop, two single men on the road."
Posted by RTW MOTORCYCLE ADVENTURE RALLY at 12:52 AM