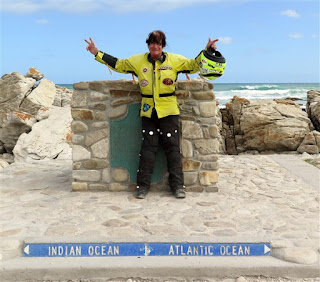 As seen above, Dr. G, Soft Butt # 9, physically tagged the southernmost tip of the African continent, Africa’s “Earth’s End.” It was the third time he had done so.  The first, in 1998, he stood on the sign in the photograph with one foot on the INDIAN OCEAN side, the other on the ATLANTIC OCEAN side, and the sign mystically cracked in the middle.  A newer, sturdier sign had replaced the older cracked sign but Dr. G did not test his cosmic motorcycle oceanomic strength by standing on it. 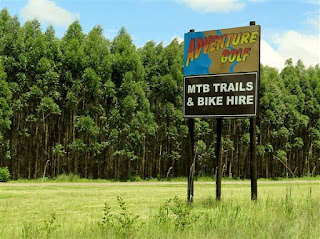 Adventure golf in South Africa, as the above photograph above advertised?  “Sign-me up,” said one Soft Butt entrant. “Our certifiable Soft Butt adventure for the coveted extra points can be scored by ‘riding’ a golf cart.” 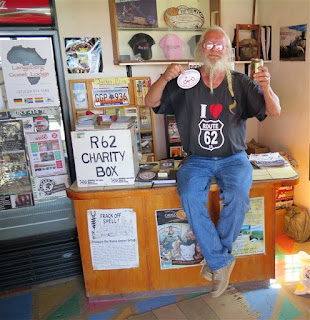 Global celebrity, Ronnie Price, proprietor of Ronnies Sex Shop & Roadkill Cafe on Cape Route 62 near Barrydale, above displayed one of Dr. G’s globally distributed “MOTORCYCLE SEXPEDITION – ABSOLUTE RIDING” stickers. Price remembered Dr. G from motorbike visits in 1998 and 2006.  Frazier had produced a film titled ROAD KILL and authored the book MOTORCYCLE SEX, common ground for the pair to laugh. Ronnie and Dr. G commiserated on how neither of their products had much to do with the three letter word starting with S and ending with X, but how the use of the word was of immeasurable marketing value.  When Ronnie was asked how he maintained his manly good looks mixed with glowing health and a positive attitude towards life over the nearly 20 year period, he replied, “Beer!” one of which he was holding in his left hand.

The stop at Ronnies was enlightening for Dr. G, not so for Livermore.  After a quick cola in the bar Dr. G went to the souvenir shop to chat with Ronnie.  Some minutes later Livermore appeared, was introduced and then quickly exited to be found sitting on his motorcycle underneath a tree, fully geared up with his helmet face shield down.  Dr. G asked, in his best Bronco Billy/Clint Eastwood mimic, "What's the matter Little Buckeroo, you didn't like the tourist stop?" Livermore lifted his face shield and said he didn't like Ronnie and had contacted Facebook to bust his Facebook account because when he was looking for the shop he was sent to several pornographic sites.  Dr. G said, "I'm sure that wasn't Ronnie's doing. You shouldn't hold it against him.  In fact, he told me his wife did all their Internet stuff and I doubt she'd be linking his business to pornographic sites." Meanwhile Dr. G was thinking, "What turned Livermore into a Dudly Do-Right, policing Facebook accounts?  This is a side of a little fellow I know has been seeing a shrink, maybe for schizophrenia?" Before the two departed Livermore asked Dr. G to take his photograph on his motorcycle in front of the sign that said Ronnies Sex Shop. 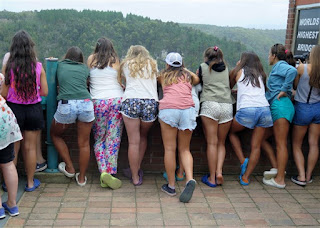 The top secret Soft Butt Rider’s Kit optioned extra points for experiencing a bungy jump at the Blaukrans Bungy, recognized at a drop of 216 meters as “The World’s Highest Bungy Bridge.”  While Livermore hiked to an edge at an observation point to photograph the bridge in the far distance, Dr. G was seen in the above picture photographing some of the closer, and to his self-proclaimed “professionally photogenic trained eye,” more scenic sights.  After digitally recording the sights, Dr. G was observed passing out personal stickers to the friendly foreign tourists, two of which, giggling, passed to him their e-mail addresses in return. 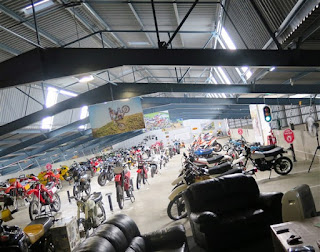 Noted in the top secret Soft Butt Rider’s Kit was an option to “do something motorbike oriented not on guided motorbike tour check-lists and by not using a motorbike.”  This the Soft Butt entrants interpreted as being a day to park the motorbikes and ride in a Toyota piloted by well-respected South African motorbike guru Dr. Deon Burger to visit the recently opened THE MOTORCYCLE ROOM on Thesen Island ( http://www.themotorcycleroom.co.za/ ) .  A walk through the museum helped Livermore reach his daily self-imposed score of 10,000 walking steps in secured areas while Dr. G and curator Edward traded tales of motorbike adventures for possible publication.  As the above photograph shows, there were nearly 100 motorbikes for public inspection. 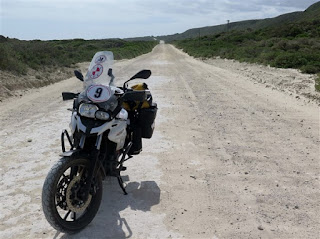 Wi-Fi, laundry and another 10,000 steps for Livermore on a non-riding day gave Dr. G an opportunity to leave his luggage at their hotel and use the BMW F700GS for some adventurous off-pavement riding.  The lay about day let Frazier, a founding member of the Fraternity of Big Dogs (www.horizonsunlimited.com/bigdog) an opportunity to push his personal riding envelope a bit and test the BMW.  The Big Dog Adventure Ride had long been a select and secretive “esoteric order of motorcyclists of high moral character” dedicated to the use of motorcycles of 640cc displacement and larger for the pursuit of adventures on and off pavement around the world. As the photograph above shows, Dr. G pursued a bit of a 10,000 meter motorcycle adventure ride, not walk,  that day. 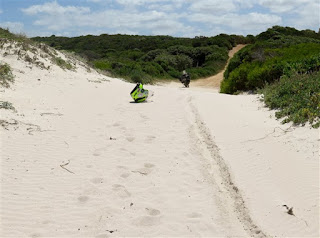 With the above photograph, Dr. G e-mailed a small conclave of Big Dog insiders an update of his pursuits with Livermore.  In the short note he wrote, “While in Africa I did manage some ‘Big Dog Adventure Ride 2017’ practice through deep, soft sugar sand. The last time I did something extreme like this (being solo, far away from a city and no Internet/cell phone connection) I broke my leg, a photograph of that foolishness ending up on the cover of my latest book DOWN AND OUT IN PATAGONIA, KAMCHATKA, AND TIMBUKTU...., or as it is now being called, HOW I BECAME A MOTORCYCLE ADVENTURE JUNKIE (https://bit.ly/1Q1hZ2O) 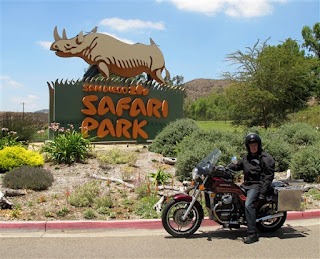 “I don’t need to pay big money for a safari, I can see all Big Five in San Diego,” said Livermore at a braii (Africans for barbeque) hosted by the owners of the motorcycle rental company (www.gsafrica.com) from where Livermore had rented the BMW F700GSes. Dr. G was reminded of the above photo he had recorded on a test ride the day before Livermore’s global adventure began in June, 2013, having said, “ Wannabe Bwana Richard, here’s where you can most easily see the Big Five if we’re going to be in five-star security hotels, sleeping and eating around the Africa.”

The pair returned their motorcycles to GS Africa’s home base, fist bumping their success. A power pat on the shoulder for Livermore from Dr. G, with Dr. G saying, “Richard, you did well on the African Stage. Congratulations. After this African leg of our ride around the world, the next legs of Europe and Asia will be easy.”

The evening flowed, as did wine and beer for Livermore, and a shot or two of Maker’s Mark for Frazier and Blignaut.  Dr. G and GS Africa principal Paul Blignaut traded global tales and tips on motorbike tours, customers and rentals. “I suspect you guys are missing home after six weeks over here?” Blignaut asked.
Dr. G had sent a note to close friends a week earlier, quoting Merle Haggard in a song about Frazier’s home in Montana, “Take me home, set me free, somewhere in the middle of Montana..." Replying to Blignaut, he admitted needing to rejuvenate his old lone wolf solo motorcycle adventuring mojo and prescription for mood enhancement drugs.

Livermore appeared to be well into the I-want-to-be-back-home-flow, showing photographs to Blignaut of his new RV with toy hauler, motorcycle collection, house and recently finished 10,000 square foot building to keep his collection warm or cool during changing seasons. Livermore was also celebrating that although he officially retired in January, his employer rewarded him with full compensation for his Soft Butt time in Africa, a well paid vacation.

The evening was filled with high spirits, but Dr. G had some background noise working on his gray matter:
1  1)    His adopted father, well-known BMW guru, Stan Myers, had passed away a few days before their booked exit date from Cape Town.  The memorial service was to be three days before the dates Livermore had booked flights out of Cape Town. Livermore did offer to change Frazier's ticket to an economy ticket to possibly be at the memorial service but Frazier had been committed to see Livemore safely in/out of Cape Town.
2)    The motorbikes had been rented for specific dates. A change could mean someone would have to pay for the difference, a penalty for change in rental return dates.
3)“Never leave your wing man.”


Frazier had been tasked with designing a soft plan or route for the ‘rtw motorcycle adventure for Livermore. Frazier’s task included Livermore’s return home, whether in Livermore’s arranged and paid for preferred first class airline seat or a pine box.

Frazier was to also carve out time from his personal life to escort Livermore, offer his motorcycling advice on a “take it or leave it” basis, and assist as needed in motorbike logistics.

Frazier was to be friendly, patient and the safety net for Livermore if needed. 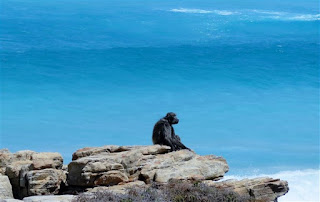 Like the baboon in the photograph above, Dr. G, whom had been described as “the world’s most cerebral adventure motorcyclist,” was weighing the options of leaving his customer (Livermore) alone in Africa, flying home to the memorial service for his adopted father or sticking with the agreed upon plan.

Instead of bailing out on Livermore, Dr. G wrote a requested e-mail eulogy to be read for his adopted father’s service.  It was later described as “a tough choice.” “Never leave your wing man,” weighed heavily on his decision.
In an odd twist, Livermore abandoned Dr. G in Cape Town a day early, having changed his own personal air flight to first class and flew home, leaving Dr. G in Cape Town with an economy ticket versus the promised first class flight for Frazier also. Livermore had cashed in his adventure wannabe chips and declared his RTW ride over: too dangerous to cross Europe and Russia on the next legs and his personal secret security consultant recommended he return to the safety of his home. Frazier said as Livermore prepared to leave, "I'll send you an invoice for the balance of the money for trip that you owe me." Livermore looked downward and said nothing, likely knowing he was going to stiff his paid guide for the balance due. 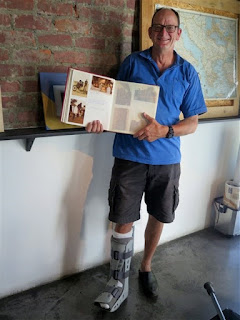 Jan-Lucas de Vos, in the photograph above, from Gordon’s Bay, had ridden a Yamaha XT500 from Amsterdam to Cape Town in 1979.  He too had been abandoned by his ridding pals on occasion.  He asked, “When your riding mates leave you, abandon you, do they fall from being a motorbiker of high moral character?”

Dr. G, pondered the question, looked skyward, and, as if having received a motorcycling agnostic cyber key to karmatic wisdom, said “What makes the essence of quality in a man? Keys to a motorcycle do not make a man, or by purchasing, renting or borrowing one, an adventurer worth his skin.”

When De Vos was asked about the cast on his foot and leg, he laughed and said,  “Motorbike bit me. I’m an adventure motorbiker, not a hiker.”

(Next: Frankfurt, Germany and a pit stop with some more planning before the rally ride through Europe)