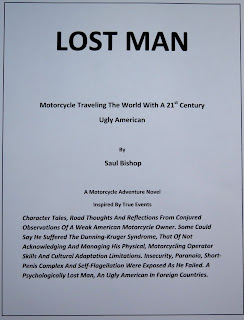 Project Director, Dr. Gregory W. Frazier, globally known motorcycle journalist, author and six times around the world motorcycle adventure traveler, said of the project, “It’s a literary project with a possible screen play at the far edge of moto-journalism. Author Saul Bishop, with some twisted British wit, promises to take the reader on the world’s wildest adventure ride around the globe, a savage journey exposing the underbelly of an ugly American truly lost away from his home, known to say ‘Yep and okey-dokey.’”

The Mutt Crashed Me And Himself Down, Didn’t Offer To Pay For The Damage

Lost His Virginity On The Farm To A Chicken

The Adventure Wi-Fi Masturbater – “I’ve gotta have internet in my hotel room or I’m not staying here, and I’m not sharing a bathroom.”

Project consultants have contributed from around the globe, ranging from motorcycle tour operators to advanced motorcycle adventurers, and include motorcycle journalists, editors and writers.

Saul Bishop is an ordained free-lance writer, blogger, ghost writer and failed professional footballer. He is best known for his work as an archivist and raconteur of adventure travel tales. Bishop is currently burning himself up as a researcher of failed adventurers, from mountain climbers to want-to-be Wild West gun fighters.