SECRETS OF PLANNING FOR STAGE THREE - THE DARK CONTINENT, AFRICA 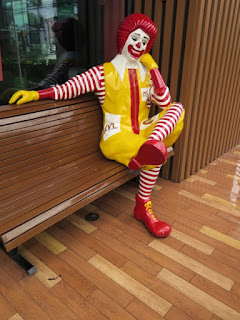 Mickey D, also known as “Macky D” (by the Brits) and “McDo” (by the French), who has seemingly located nearly everywhere on the planet, said to one of the intrepid adventurers who wished to remain out of the public eye, not wanting to be seen as a novice, “Sit down here Grasshopper, and I’ll share my knowledge about the Dark Continent. Forget those travel books you’ve read, DVDs watched, wild rumors heard in bars and the Internet misinformation. While we plan your Africa adventure, would you like a Big Mac, order of fries and a Coke?”

Secrets of planning for Africa in 2017, Stage Three of The Great Around The World Motorcycle Adventure Rally, Pit Stop 2016

The first piece of valuable information Mickey D shared was, “Don’t flaunt that you have money. Go incognito; look like you’re an odd Cheapo traveler, not some big-moneyed traveler.  If you’re famous, try to hide that fame unless you go in an armed convey, and even then don’t trust your body guards or drivers.  By the way, have you signed up for a survival course?”

“Errrr, not an expensive and structured formal course.”


Mickey D proclaimed! “Yo, Jambo, you could well end up in an African village cook pot if you’re not prepared. If you don’t take a formal survival training course, at least learn some hand-to-hand combat training.”


Grasshopper Dr. G, not wanting to be the main course referred to in a soon to be published adventure cook book, opted for Muay Thai shadow training with a noted film star who was working on a film titled THE ASIAN CONNECTION.  For the possibility of an abduction and gunfire Dr. G fully dressed in his Aerostich riding gear, Nolan helmet, and Lee Parks designed gloves, and then asked his neighbor to shoot him with a paintball gun while the neighbor’s wife tossed lighted fire crackers at him.

The paintball and fire cracker training ended when several paintballs landed in a rather thinly covered pubic area just below the belt buckle of the riding suit, ringing cranial bells, and causing tearing and severe testicular pain.  While the screaming adventurer was on the ground folded in a tight fetal position the neighbor’s wife continued to toss fire crackers until one bounced up and into the front of his helmet face shield.  The resulting thrashing by the wounded road warrior, holding his crotch with one hand and his face with the other, knocked over several bottles of beer that had been set on the ground to free up the hands of the gun guy and his wife.  Beer being considered more important to the wife and paintball gun owner, the faked abduction came to a halt and flowing beer was stopped. 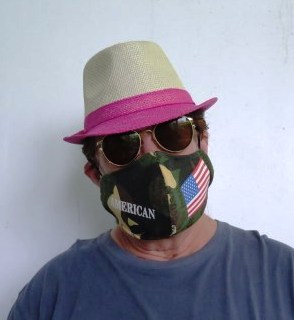 Pictured is the new Africa travel image one of the two Grasshoppers adopted. No one would guess Steven Seagal’s sparring partner was the model in the secreted photo. A modified travel quote from Seagal and his sparring partner emerged, that being, “I am hoping that I can someday be known as a great writer, rather than a sex symbol.”


While no traveler wants to come back from Africa without some story of wild animals or guys with guns in their face, Mickey D explained that most of the wild animals wandering aimlessly along the African roads had been eaten by the natives over the years, except for elephants in Botswana and an occasional snake sneaking across a dirt track or paved road. To see a lion or tiger would most likely require the rally travelers to park their motorcycles and ride in a caged game vehicle inside a safari park, an adventure the pair considered to be about as exciting as watching ants mate on the Discovery Channel. 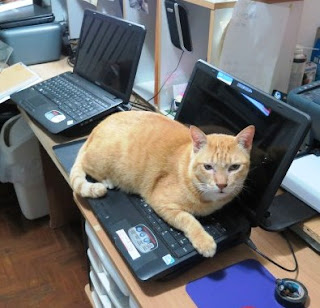 Pictured is the wildest tiger the adventurers were told they might expect to see, one on their computer screen or smart phone.  “Meow.”

Over the last several months numerous models of motorcycles had been tested for possible use in Africa.  Carrying capacity and durability were the primary factors for consideration.  Mickey D said there would be almost no motorcycle dealerships or parts depots for several of the motorcycles considered.  He said, “Just like you can’t buy a Big Mac everywhere, you’ll likely not find the proper tire to fit that Victory or Indian Scout Sixty you’re testing. And you’d better outfit your motorcycle with all the electronic devices you can afford because you don’t want to become lost on The Dark Continent.”

Listening to the globalized advice of Mickey D, one of the pair started to electronically prepare a 200cc motorcycle that could be disassembled and shipped into Africa as parts, and then re-assembled. The overall cost would be about one fourth of shipping a larger, fully assembled motorcycle. 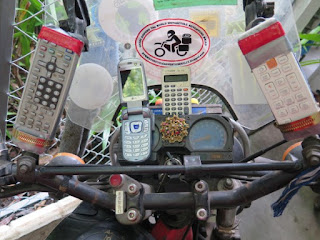 The Boy Scouts organization was birthed in Africa, so being keen on following culture and tradition, the smaller 200cc motorcycle pictured above was electronically prepared as seen here, to always be prepared as the Boy Scouts were taught. 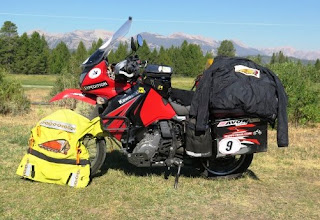 This KLR650 pictured above was tested over some of the most difficult roads, trails and tracks on North America and found suitable for anything Africa could throw at it.  However, when the costs associated with shipping it to Africa, paying import taxes, handling charges and down time associated with bureaucracy the Kawasaki was rejected when the testing proved it would eventually cost three to four times its original purchase price to use it for the Africa stage of the Round The World Motorcycle Adventure Rally.


A third secret consultation with Mickey D found the global guru dumbfounded when he discovered the pair were seriously considering motorcycles other than BMWs.  He asked them, “Didn’t you two attend one of the seminars offered by the two Brits traveling around the USA proclaiming themselves as being ‘two of the world’s best adventure riders?’ They used BMWs. And even those movie star fellows who made the DVD and had the book written about their convoy through Africa were using BMWs.” 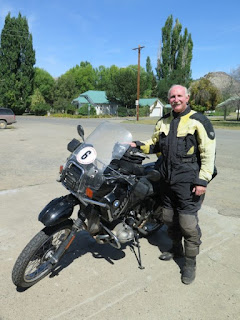 This well known BMW R100 GSPD was road tested after Mickey D’s advice.  But it first needed a new drive shaft, new electronic rotor, new diode board, new starter, and a serious mechanical tune-up.  During its road test it was Roadside Assisted on an AAA trailer for a third time. As one of the French mechanics said while trying to re-glue magnets on a French made starter, “If you spend the big money to take this BMW where you are planning to go, rent a truck and trailer to follow you, maybe carrying a spare complete BMW as a spare, plus a mechanic.  Didn’t that McDo guru tell you that BMW stands for ‘Bunkerbust My Wallet.'"

The BMW mechanic further explained that if the pair was going to rally around Africa they should also buy the official Texas Catheter Codpiece.  The design originated from a long distance motorcyclist and was to fill the void of a plastic bag when riding long distances where a quick on/off stop at one of the Mickey D fast food stops to use the rest room might not be convenient. He described the Ironbutt Texas Catheter as an option for the “world’s toughest riders,” and could hold up to a quart of liquid.  The trick, he said, was inserting the catheter, an art that sometimes brought the world’s toughest riders to tears and their knees.  He suggested, “it’s best done by one of the Ironbutter staff using both hands while doing the insertion, with four other of the world’s toughest riders each holding an arm or leg.”

Secretly photographed for the latest issue of MOTO POSEUR magazine is a Texas Catheter Codpiece, rumored to be available from companies like Tour-a-Travel and local Klin-Mart Adventure wear dealers.  The $5,000.00 USD unit not only collects liquid body excretion but fills a void in the Napoleonic frontage area of certain adventure marketed riding suits.

During a final consultation with Mickey D he reminded one of the entrants, “Remember, in Africa the right hand is used for eating, shaking hands and making any contact with hygienic places, like picking a fly out of your nose or using a tooth pick to clean teeth. If needing the privacy of an outhouse for ablutions, you might want to consider renting a portable toilet to have on a trailer behind a truck with the spare BMW motorcycle and parts if you can’t eat a Big Mac with your right hand.”

“Posh!” said Dr. G.  “I’ve been there before.  We don’t need to be wasting money with a stinking trailer behind us. Plan B is to be a real adventure rally riders, carry what we need with us, to be fully unsupported and self-sufficient.” 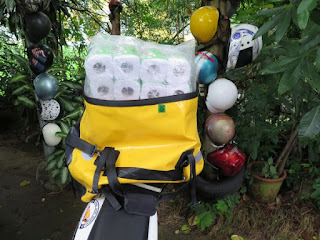 Photo shows one of the two entrants solving part of Plan B.  He purchased an 89 liter waterproof bag which he tested by filling it with enough rolls of toilet paper for his entire Africa trip. 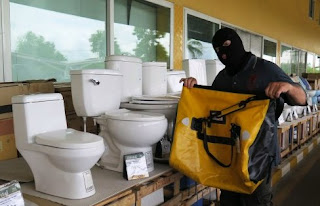 Further research found a small portable toilet (the one on the left) that would fit in the 89 liter bag if the toilet paper was compressed properly.

As Stage Three of The Great Around The World Motorcycle Adventure Rally rapidly approached, the pair, having been joined by a growing number of global and Internet kibitzer entrants, felt reasonably confident they had done their planning well.

As one said, “Carl Stearns Clancy did Africa in 1913, solo and unsupported, on a Henderson motorcycle.  Those two self-proclaimed 'world’s best adventure riders' had time to write a cook book along the way (‘salt and stir Yanks for an extra 10 minutes because they are known to be tough, and through stickers and license plate holders, are referred to as the ‘world’s toughest riders’) and we have all the modern electronics needed for a digital safety net. If we bunkerbust our wallets, we’ll even have those new protective and sexy looking codpieces.

Frazier said, "No worries about the road. My biggest worry is being committed to this loop around the globe, based on a handshake with Livermore, a man's word of honor, like in the October 2015 series Blacklist (SO301) where Raymond Reddington and FBI agent Donald Ressler are having a discussion.  Reddington says, 'All I want is your word as a man of honor.' I hope Livermore didn't miss that segment, or that he knows what a word of honor means." 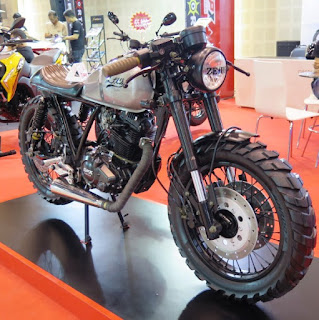 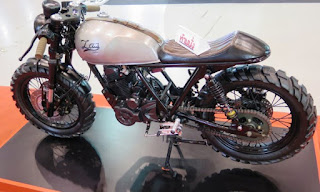 Bearing in mind one of the initial parameters of the rally, that it be done differently from the 100’s of other ‘round the world motorcycle journeys, last minute field research on the best motorcycle for their adventure continued, as noted above.

While the above motorcycle model may have weight and space limitations, the below model was suggested as being able to accommodate the 89 liter toiletry bag, as well as some of the security issues that concerned earlier travelers. 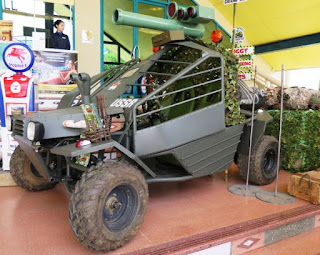 And what is next in their planning stage? A toy hauler carrying nurses with the same blood type as the two entrants, or possibly a ghost writer to nightly bang out 500-1,000 words for an Africa Motorcycle Adventure Cook Book?

One major change in the equation of two single fellows on motorcycles circling the globe was only one was still single. Livermore's marital status had changed.


Posted by RTW MOTORCYCLE ADVENTURE RALLY at 6:46 AM