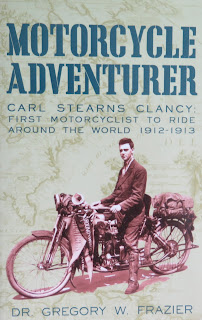 This travelogue originally authored by Carl Stearns Clancy is for the true motorcycle adventurist, the travel dreamer thirsting for motorcycle touring, whether around their continent or around the world. Clancy circled the globe during 1912-1913 on a 1912 motorcycle. There were no GPSs, ATMs, Internet, and often no gas, roads or motorcycle repair shops. The book MOTORCYCLE ADVENTURER describes the first motorcycle global adventure ride by the man who survived a dream quest with his gun, determination, grit, and guts. His adventure has been described as "The longest, most difficult, and most perilous motorcycle journey ever attempted." Clancy himself wrote, “Anyone who desires to diverge from the beaten path and visit points that may be of peculiar interest to him personally, the motorcycle is undoubted the only satisfactory means of travel." He added, "One must die sometime and to die with one's boots on is very noble."
MOTORCYCLE ADVENTURER was a 16 year research project of back and fact checking, edited by author Dr. Gregory W. Frazier, himself described as "America's #1 extreme motorcycle adventurer," and whom has raced, ridden, and repaired motorcycles over 1,000,000 miles and five times around the world. Frazier is a best-selling author, journalist, film producer and professional photographer. He says of motorcycle adventures, "I hate adventure that involves snakes or sharks." Frazier added, “Clancy was the real deal. This book is a guidebook for those seeking the freedom of motorized travel associated with two wheels to adventure, to see if they have the modern day ‘ride stuff’ and psyche to take on serious adventure.”
http://bit.ly/w39HNg

Writer – Dr. Gregory W. Frazier
Professional motorcycle adventurer Dr. Gregory W. Frazier (“Dr. G”) has circumnavigated the globe five times by motorcycle, logging over 1,000,000 miles in the process. He has been described as “America’s # 1 extreme motorcycle adventurer.” No stranger to danger, he’s been shot at by rebels, jailed by unfriendly authorities, bitten by snakes, run over by Pamplona bulls, and laughs about having been smitten and taken advantage of by several products of Adam’s rib while traveling the roads around the world. From one end of the earth to another, Frazier continues to actively pursue and chronicle his two-wheel adventures and expeditions to the most remote places on the planet. Frazier is a best-selling author, motorcycle journalist/columnist, film producer/consultant, professional photographer, and motorcycle industry promoter. His work appears widely throughout the international motorcycling press. When not adventuring on motorcycles around the world, Frazier lives quietly in the Big Horn Mountains of Montana. 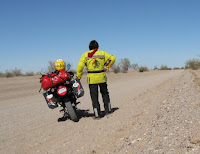