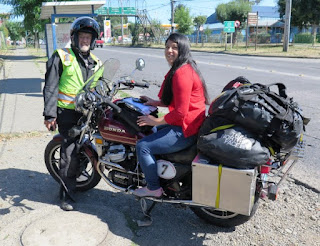 (Above) While afraid of making new non-American speaking friends, Livermore did let some VIPs try out his motorcycle by sitting on it, but the VIPs were seldom old men or adventure riding maniacs.  Dr. G was more amenable to the youthfully spirited or more aged males, however he made sure there were no keys in the ignition, not trusting a friendly sit to become a quick get away into the unknown distance.

Chile, Sand, Holy Boots and Their Physical Well Being

Leaving the country of Peru and entering Chile was the fourth border crossing for Dr. G and Livermore.  The paperwork process on the Peruvian side of the border was quick and painless, taking less than 20 minutes, as if the officials were happy not to be dealing with the road weary gringos longer and their limited Spanish speaking skills, or possibly it was the hot and humid day mixed with no wind and the ripeness of the Dr. G’s and Livermore’s Aerostich riding jackets, pants, and boots.

However, on the Chile side the duo learned to be outwardly patient as they watched the Customs officials require busloads of tourists to exit the buses with their luggage and send all bags through an X-ray machine. The thought of unloading Livermore's large and overloaded bags and sending them through the machine was less disconcerting than the thought of them unloading their side panniers and explaining why they were carrying so many new and used spare motorcycle parts, items that could be targeted for high import taxes. One of the two was heard to mention, in his best Americanized English “Unloading all our gear is going to be a royal pain in the ass.” A Customs official, unknowingly overhearing the comment, smiled and said in mixed Spanish and English, “Si, muy grande pain in the ass.”

Two of the three laughed, and Livermore and Dr. G were sent on their way having had to only send their top bags through the inspection and not unload their side panniers and spend hours itemizing the spare parts inside. 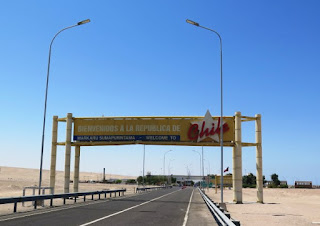 The “Welcome” sign said the pair had successfully passed all entry requirements needed to enter Chile.  A quick look at both sides of the road and miles of sand in each direction was less welcome. One of the pair had imagined Chile was covered in green forests and grape vines instead of the sands of the Atacama Desert where it looked like it had not rained in a 1,000 years. The world’s driest non-polar place on the planet would be their environment for the next 600 miles.
Driving through Chile’s Atacama Desert was fun for a while, but after two days, and the often dead straight road, at a gas station stop Livermore asked, “Is there much more of this on our ride around the world?”

Dr. G replied, “Not much.  About the only place that compares is the Namibia Desert.  That one I believe is more scenic and if we’re lucky when we are there in Namibia, maybe we can find some of the places where they did location filming for the latest MAD MAX movie.”

Livermore, who said he'd never seen a MAD MAX movie, frowned.  However, an avid ski enthusiast, he said with parched lips, “When will we see some snow?”

Piqued, Dr. G replied, “You want snow? Back at your house in Kansas, err... Michigan, right now they have plenty of snow, same with my place in Montana.  Snow?  The only snow I like is what I see on my TV if I fall asleep and the channel goes off the air. Do the same in your room and you can see snow tonight.” 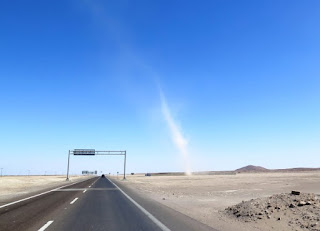 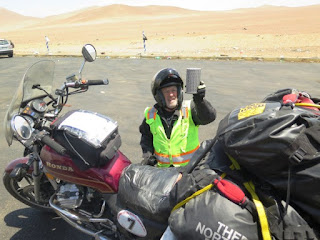 The price Livermore paid for the Atacama Dust Devil Adventure was a clogged air filter. Not having a spare air filter, Livermore applied his farm boy learning to think outside the box.  He tore out the clogged paper liner inside the metal frame and then cut a cotton sock in half and used the sock to cover the air cleaner.  Several days later he reported that his “Livermore Farm Boy Fix” was doing as well a new air cleaner from Honda.
One of the key elements to traveling unsupported as Livermore and Frazier had been was to learn to depend on their own creativity for solving problems, not having the benefit of a local motorcycle repair shop or parts depot to purchase needed parts or someone else along as a “fixer” or “guide.”  When a headlight on one of their motorcycles quit working they spent an hour swapping parts from the other motorcycle and chasing wires before spicing into a live wire to solve the problem. Their ability to identify a problem and solve it themselves gave the pair a sense of survival, confidence building and satisfaction not afforded when traveling in a supported group style. Their problem solving also gave reasons for toasting their successes on a few occasions. 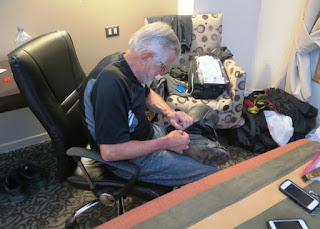 With no Spanish speaking skill other than "toilet" and "Americano" and a damaged motorcycle boot cover, Livermore took up his own needle and thread and was caught here doing some sewing to fix his problem. He had discovered the problem earlier in the day while exploring the inside of a church, which lead to the damaged boot being referred to as a Holy Boot.
Livermore and Frazier had physically prepared for their two months of almost daily driving motorcycles in South America, often over rough terrain, with different regimes.  Dr. G chose to prepare by spending more time and miles driving motorcycles over varied road and trail conditions while Livermore added long walks to his regular workout sessions.  By the time they reached Chile, 5,000 miles into their trip, each had also established a pattern to ease their aches and pains at the end of long days.

Dr. G, long a practitioner of self-medication, followed his personal prescription of mixed liquid chill and pill enhancers and tippled early to bed at the end of a tough day.  Livermore would dine with in the hotel restaurants, and then make a long walk near or inside the compound giving him an opportunity to both walk off a heavy dinner as well as explore the nearby local sights. 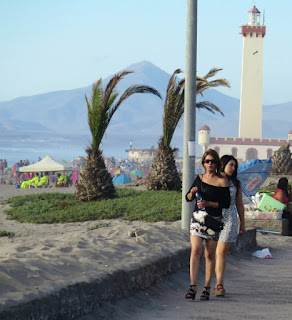 This photo was an example of the varied styles of ending a long day.  After dinner Dr. G had retired to his room where he read various verses and sections of the book provided in the night stand by the Gideons International Association or his copy of the Honda GL650 maintenance and repair manual.  Livermore chose to slowly stroll the beach front promenade across from the gated entrance to the hotel towards the light house in the background, taking in the sights, and sometimes eying other strollers while walking off dinner.
In Santiago, it was decided to re-shoe their motorcycles with new rear tires. Livermore's preparation decision in Miami to shoe the motorcycles with cheap tires instead of the harder compound and more expensive type recommended by Dr. G was going to bite the pair in the middle of Nowhere. While the cheap tires had tread left, the pair knew the tires would not make it to their final destination and the odds of finding replacements in Patagonia were long and could cost them several days in downtime, as well as financially cost more than if replacements were purchased in Argentina.

Luckily the pair connected with Mick Hoey (from Denmark) and Tomas Karstegl (from Chile), principals in a well known and respected motorcycle tour, rental and repair business, Ride-Chile, www.ride-chile.com.  Within minutes they found new tires and ordered them for Frazier and Livermore to collect at their business location.

While there, road news was shared as were tips and tricks about traveling the world.  A big surprise for Dr. G was when Karstegl showed him a book written by Frazier, titled RIDING THE WORLD.  Karstegl had been given the book by a representative of Kawasaki USA when he was piloting a Kawasaki KLR650 to the USA and stopped in Irvine, California at the Kawasaki USA home offices.  A greater surprise was discovering the book had been given to Karstegl several years before by Dr. G’s Editor-in-Chief at Kawasaki's ACCELERATE Magazine where Frazier was the Adventure Editor-at-Large.  After Dr. G agreed to autograph the long out-of-print book, it was agreed by all that the world was truly a small place when it came to motorcycle travelers. 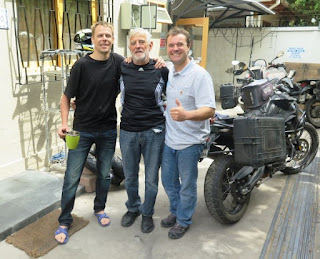 Mick Hoey (left) and Tomas Karstegl (right) were photographed here at their Ride-Chile headquarters joking with Livermore about how many more miles of sand, dust and wind he might expect as he kept driving south, Livermore expressing how tired he was of the choice of long straight road and boring desert riding days.
As the pair approached Argentina, Dr. G again offered his thoughts on food in Argentina, with the addition of Argentine toilets from the two previous adventures through the country, saying, “Argentina has beef and excellent wine so you should at least learn to say beef and wine in Spanish.  We’ll also find well stocked stores with toilet paper so you carrying four bulky rolls of USA Chiffon brand can start consuming....what you're carrying.”
Posted by RTW MOTORCYCLE ADVENTURE RALLY at 2:31 PM