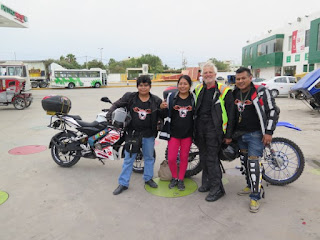 Livermore made some new adventure riding friends during a Peru pit stop. The Peru riders traded travel information and wanted to be photographed with “Motorista Global” as Livermore’s freshly printed business card read, or translated to English, “Globe Rider,” which he was far from being but liked people to think he was.

Exiting Ecuador and entering Peru was the third border crossing for Dr. G and Livermore.  The paperwork process on the Ecuador side of the border was quick and painless.  However, on the Peru side the duo learned to be patient as they watched the Customs employees enter painfully and slowly handwritten details in a thick paper notebook. Added to the patience learning curve was having a family move to the front of the line ignoring those already waiting, a test of Dr. G’s friendly nature given the hot sun and waiting for 30 minutes wearing his hot riding gear. 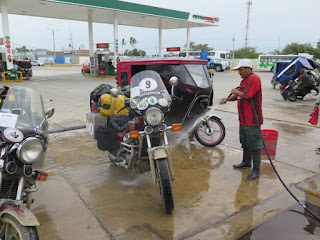 A car wash worker carefully gave the motorcycles and engines a cleaning and refused any cash payment, wanting to contribute to the rally adventure, but did gladly accepted a rally sticker from Dr. G. To him, the rally sticker was worth more than the cash he would have to turn over to his boss.
While attending to the washing of the mud covered motorcycles, Livermore expressed need to attend to his personal hygiene, that being to have his clothing washed. Dr. G shared with him a “Zen motorcycle traveler secret” he had learned from the Irish riders who had joined them on The Clancy Centenary Ride as they crossed the USA.

“You can avoid your underwear washing time, usually taking a day of downtime, by hand washing them during the shower you take each night, and then drying them the next morning after affixing them under your luggage tie down straps.”

Livermore was not Zen or adventurous enough to thrive on seeing his tiddy-whitties underwear blowing in the wind, sand, dust and truck fumes using this option.  That left what Dr. G called the “five day au natural Irish trick."

“On Day 1, wear the fresh undies.  On Day 2 wear the Fruit of the Looms turned around. On Day 3 flip them inside out, wear them front to back. On Day 4 rotate them back to front. After washing them in your shower or sink on the evening of Day 4 hang them in your room to begin to dry. They will take two nights to dry, and when done you can start the cycle over again.

“Where does the au natural part come in?” Livermore asked.

“Ah, that’s on Day 5, when you have your semi-wet underwear wrapped inside a dirty T-shirt in your regular clothes bag.  That day, Day 5, you don’t wear any undies, you ride au natural.” 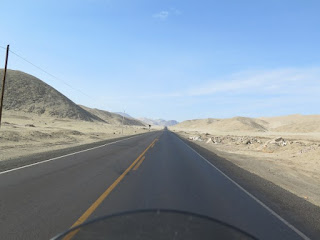 Peru was many seemingly endless miles of desert riding with reasonably good paved roads and time to reflect passing through what Dr. G called “The Big Empty.” An occasional pot hole or animal crossing the road would keep the riders awake.  Any ventures off the pavement into the deep soft sand resulted in immediate bogging down of the heavily laden motorcycles and was avoided if at all possible
.


Livermore had prepared both 1983 Honda GL650s prior to the South American stage of the pair’s adventure.  At the end of each riding day, while Dr. G self-medicated claimed arthritic joints and former broken bones with a cool swill and pills, Livermore could be found for a few minutes checking his oil levels, tire and suspension pressures and attending to any mechanical parts that may have worked loose during the day of hard driving. 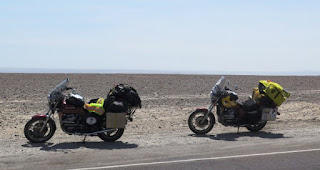 The 1983 Honda GL650 engines ran cool in the heat of the Peruvian desert. Once in a while, when stuck in thick traffic passing through towns, the radiator fans would automatically turn or for 10-20 seconds.


Adjusting their diets while traveling found Livermore and Dr. G comfortable with skipping lunch and snacking at  gas stations during the day.  Chicken was the primary meat on dinner menus, and part of their adventure included trying to order non-chicken items for their main course.  Sometimes what was served was a mystery meat but by the time they had reached Peru neither had mistakenly ordered chicken foot or chicken head soup. 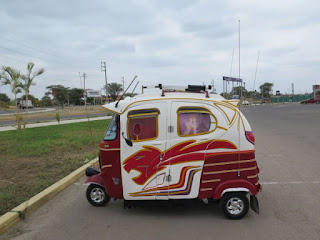 Typical of taxis in Peru were moto taxis, a three wheel vehicle with a small motorcycle engine as the power plant, usually in the 125 cc range. In thick city traffic they could be likened to errant bugs, zipping in and out of stopped cars, trucks and buses. Often they would swerve right and then make a quick left or U turn.  This one was not typical in design and deserved a photograph.
At Nasca a routing decision was made, similar to the many made during the running of the Dakar race just days before, to shorten the route.  Livermore wanted the straight, easy road and the warm weather route along the coast of Peru versus the possible cold and wet of  Dr. G's suggested twisty route through the mountains and into Bolivia.  Further weighing the decision was Livermore not wanting to visit Machu Picchu alone (Dr. G had said, "Been there, done the hike up and back, still remember the pain in my bad knee") or spend time in the quaint town of Cusco, having heard the roads into the mountains could be a challenge.  Some political tensions between Bolivia and the United States of America also played a factor in Livermore's trepidation, as did the pair admitting to not being dedicated to tourism simply following the Gringo Trail and published tourist guide books and more to their lives as motorheads on the road.  They agreed to continue down the west coast of South America, entering Chile next and opting for the possible challenge of high mountain riding in Southern Chile.

As the pair approached Chile, Dr. G offered his epicurean experience on Chile from his two previous adventures through the country, saying, “Less chicken guts and parts for dinner in Chile and a higher probability of a Big Mac with some good medication mixed with the fruit of the vine or local brew along the way.”

Part of Dr. G's 'Patience Learning Curve' had been the discovery of a mix of swill and medicinals at the end of each riding day, and opting to dine away from the more particular Livermore's choice of hotel restaurants. Dr. G said, "I dislike only dining in hotel restaurants, prefer getting outside of the compounds and mixing with the locals.  However, after eating local foods while looping the globe day-after-day, I've never met a Big Mac I didn't like."
Posted by RTW MOTORCYCLE ADVENTURE RALLY at 1:32 AM

New comments are not allowed.