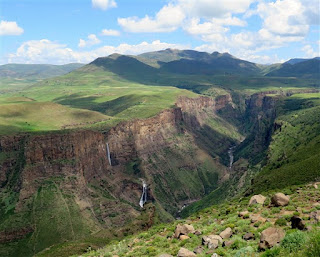 As the above picture depicts, the Soft Butts knew they were no longer lounging on South Africa’s Karridene Beach at the five star Protea Hotel by Marriott south of Durbin.  A vote for the tougher Sani Pass route into Lesotho resulted in a 1-0 vote, the scale balanced by one Soft Butt who had “been there and done that in 1998,” whereas the other was still trying to filter fake information, having heard the “Sani is still much gravel and dangerous,” and the road to Qacha’s Nek was safer.

No T-shirts needed, the Soft Butt entrant #9 bent to #7's desire for the elements of softness, security, Wi-Wi and safety.  They scored extra points by entering Lesotho at the lower tourist and quieter border, but after a high price of stress and trepidation for # 7 due to a few kilometers of South African gravel, dirt, road construction and upward elevation change. 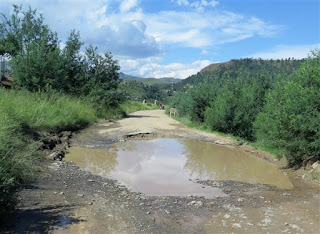 The photo above shows the physical “No Man’s Land” between the borders of South Africa and Lesotho, far from the smooth paved rolling roads of Kansas, in the USA.  A stop to test the depth of the water while looking for hidden football- sized rocks underneath the brown water gave one of the entrants time to check and kill his electrical/digital recording devices, not wanting another adventure like that experienced when entering South Africa from Botswana (see earlier reportage). 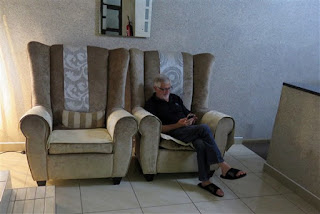 One of the pair needed to connect with home daily, telling friends, family and his Facebook followers he was OK, answer and send e-mail, and check weather conditions for the next day, or as Rene Descartes might have written, "I connect; therefore I am."

He also trolled hotel booking sites looking for safe rooms with restaurants and secured parking to make reservations for the next nights. Sometimes his fix was satisfied by a SIM card to one of his two smartphones.  Other times it was fed by Internet connections, specifically Wi-Fi that reached far enough in hotel rooms.  The photo above shows # 7 connecting to the hotel Internet connection in Lesotho from the hotel lobby because he had not purchased a SIM card and could not Wi-Fi connect from his room.  Lesotho had the Net covering the Kingdom in many places, but not always at the level of a five star Protea Hotel in South Africa. 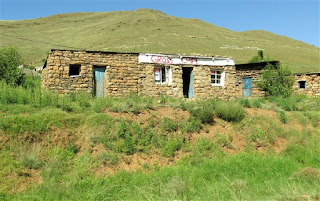 Photo above was of the Gross Cafe.  Again a vote to stop and an adventure in eating was 1 for and the other against. One entrant waved the other on, possibly remembering they were not in Kansas where he could order an appetizer of shrimp salad, followed by broiled Kobe beef with a desert of cake and ice cream topped by a red cherry. 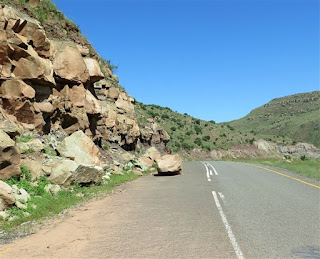 Photo above was taken on a main road through Lesotho in the morning.  # 7 and # 9 vectored safely around the obstruction that could possibly have been unseen in the darkness.   An evening rain storm 6-8 hours before caused numerous landslides over the road, another of several reasons the Soft Butt team of # 7 and # 9 did not drive at night. 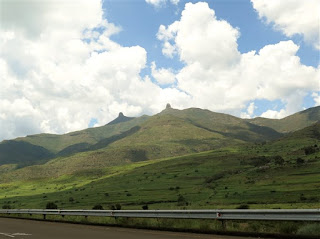 Passing the above mountains reminded the multi-lingual of the pair of the Wyoming Grand Tetons. Les trios tetons (French trappers name for the Wyoming peaks  – “the three teats”) had been Englishized to Grand (big) Tetons (teats).  In a busy tourist restaurant that evening # 9 posed to # 7, “What do you think would be the French word or words for those two mountain nipples seen today?”

# 7 lifted his left hand, regularly wrapped around one of his two smartphones, and offered, “Lemme see what Google says,” and then began to thumb peck.

From a nearby table an attractive lady looked at the pair, having overheard the question and the Google’d answer.  She finished her long thin cigarette, smashed it in an ashtray, and in French said towards # 7, “Try mamelons.” 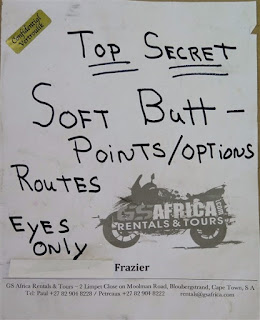 The Internet lied again, this time about a five star hotel in Maseru.  After the pair found what was shown to be far different from the photo which had been booked, and found to be fully booked, they scrambled to see what the Rules were in their Secret Soft Butt Rider’s Kit pictured above.  They had recorded enough miles and points to move onward, across the border and back into South Africa, which was their decision.

Again the question was raised about wild animals, possibly chasing them after leaving the urban area of Maseru for the wilds across the border.  Dr. G remembered the story of another global traveler who had a nail dropping device installed on the back of his motorcycle to drop nails on the road behind him if two or four legged animals were chasing him, similar to a James Bond device.
Laughing, Dr. G said, “We’ve not got time to make some high tech fix to drop nails on the road after you push a button on your handlebars or smartphone.  Let’s go low tech, stop at a hardware store and buy you a bag of nails you can carry in your pocket, toss them on the road when a lion or tiger is chasing you.”

“What about you?” asked Livermore.  “You're not worried about something or someone catching up with you?”

“No,” replied Dr. G. “I’ll simply drive my motorcycle faster than yours. If the animal, or the bad persons, should catch up with you they should be satisfied with your Kansas soft butt rather than trying to chase after my sorry old road hardened one.” 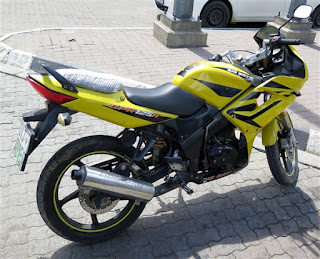 Seen exiting Lesotho on the Lesotho side of the border was the above photographed “Big Boy,” a 125cc motorcycle, one of only three motorcycles the pair had seen while passing through the Kingdom of Lesotho.  Soft Butt # 7 took notice of the small displacement.  # 9 pointed to it and said, “Likely a good daily runner but no 1,000 mile hard butt days on that Chinese two-stroke kicker, except for some WTFOT fellow I know from England who humped a 1,000 kilometers in one day on a 125cc Tiger motorcycle from north Thailand to Bangkok.”

The pair successfully exited Lesotho and entered South Africa while escaping the  imagined wild animals or bad people on their way to a restful night in Ladybrand.  As they passed through town one of the pair was observed frantically searching the city streets for a hardware store, possibly to purchase a bag of James Bond nails.
An interesting phenomenon about Livermore's adventure seeking, or rather his going away from it.  When it was suggested the pair ride over the famed 9 kilometer long Sani Pass, The Highest And Most Dramatic Road In South Africa, Livermore chose to stick to the lowland pavement and quickly reach hotel.  When asked why they'd rented BMW GS motorcycles, ideally suited for gravel roads like the Sani Pass, he replied, "I've read on the Internet it's dangerous."
Dr. G countered with, "It's dangerous when wet. Today it dusty and dry. I did it in 2000 with a loaded BMW R80G/S and then again in 2005 with my lady friend with Parkinson's riding pillion on a R1100 GS - both times it was safe unless I did something stupid.
Livermore said, "It's better we play it safe, get to a hotel with security and a good internet connection."
Livermore had turned back at other touch points like at Coldfoot, Alaska, thus not reaching Prudhoe Bay/Deadhores, and again in Bariloche, Argentina, choosing not to try to reach Ushuaia, both times claiming he had read on the internet about them being too dangerous.
Posted by RTW MOTORCYCLE ADVENTURE RALLY at 5:21 AM