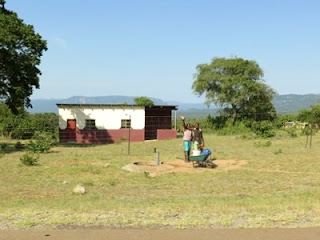 As the photograph above shows, people were friendly and often waved as the Soft Butts drove into Swaziland. Livermore had rejected the optional route through Zambia, Zimbabwe, and Mozambique, deciding to make a right turn after Swaziland.  The one finger salute was given to the Internet idiots that were hoping for the pair to lose valuable miles and time needed to obtain visas for Mozambique.  However, the adventurers had to first experience an adventure at the South African border when entering South Africa.

Entrants # 7 and # 9 had discovered their “secret Soft Butt packet of instructions” had their optional Soft Butt route vectoring out of Botswana, into South Africa, and then out of South Africa and into Swaziland.
The team, upon entering South Africa, avoided disaster and possible serious jail time when the techie one of them failed to see or ignored the signs at South African Immigration and Customs that said “NO CAMERAS!” He left his helmet Go Pro camera “On” when he entered the Immigration area, and then placed the helmet on a desk directly facing an Immigration officer who took note of the blinking red light after beginning to process another of the team’s entry permit.  The lady officer stopped processing the permit, pointed at the camera mounted on the sitting helmet and demanded, “What is that blinking red light?”

After failing to receive a response because the entrant at the desk had no idea what she was asking about due to the camera being behind him, she made a second demand, this time more sternly. A South Africa resident standing in line told her in Afrikaners that it was a camera on the helmet and that # 7 had been filming themselves riding.

The Immigration officer sternly said, “Turn it off!” and then repeated the directive when the first one was ignored by Livermore. She could have easily called the heavily armed security guards to confiscate the camera as well as one or both of the entrants and had them tossed into a small room where rubber hoses and water boarding might have been used to get the truth out of the suspected motorcycle mounted foreign spies.  Fortunately the local South African in the line got the message to the offending culprit and the digital film maker quickly dug out his smart phone and turned off the illegal and offending camera.

A day earlier a tale had been recounted about how two other foreign travelers had filmed buildings upon entering a different country, then foolishly posted their recordings on social media.  They were later arrested and placed in jail as being foreign spies.  After some horrendous days in jail they were deported from the offended country, happily but without their motorcycles.  # 7 and # 9 were more fortunate and the recording camera was simply turned off, then their passports quickly processed allowing them to enter South Africa. Their intentional or unknowing error could have been quite costly in time and money and they agreed an adventure best not pursued. 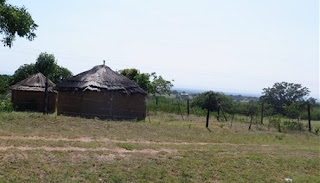 The photo above shows some of the houses of Swaziland residents. There was no electricity, no running water and no lawn person to cut the grass.  The level of per capita income between surrounding South Africa and Swaziland was obvious as soon as the border was crossed and the entrants started their route through Swaziland. 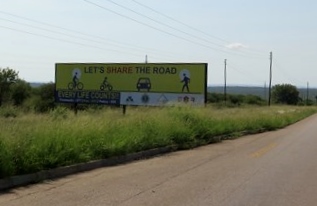 The large road sign above pictured reminded drivers to SHARE THE ROAD as they drove in Swaziland.  Numerous small and domestic animals were seen on the roads, as were people and an occasional bicyclist. Livermore lightly lamented again that he had seen none of The Big 5 African animals.  Dr. G laughed and said, “As I’ve told you before, unless you pay the big money for entry into a safari park or park the motorcycle and take a bus or people hauler through a national park, the only Big 5 you’ll see are on a road sign, safari tour promotional pamphlet, in wood or stone carvings, stuffed heads in a bar or on the Discovery TV channel. You wanted to take the straight, quick and easy road through Botswana, so saw none of the 80,000 elephants freely wandering further north. Maybe you should look for the Small 5, like lizards, birds, and maybe later penguins.”
Livermore's concern for security and Internet connections had him booking them their first night in Swaziland in a former “Christian Crusade for Christ” retreat center.  Dr. G commented on it being a nice enough place, but well away from the liveliness of a city or traveler’s hotel/motel/Guesthouse/B & B/Backpackers place. The new owners had a stated “commitment to continue a Christian culture,” so the pair could say they were “getting right with God” for the night.

The receptionist at the front desk, Ms. Pixilee, bent to the request from Livermore to open the kitchen and even helped prepare a dinner (in the closed restaurant) versus the team driving a few miles back into the city of Mbabane for evening eats. She had been told by Livermore when they checked in and discovered the restaurant was closed that the only reason he had booked the pair into the lodge/sleeping place was because it advertised a restaurant on Booking dot com.  That was not entirely true, but that was the message she was given when they checked in and he discovered the eating inconvenience.

It was a Saturday night.  Dr. G looked skyward and quietly whispered that maybe it was in the Soft Butt cards that they had come to the remote, dead quiet, retreat center to skip a meal and lock themselves in their rooms for 12 hours to get right with God using the Gideons bible on the night stand.
Pixilee was a single mother with an 18 month-old daughter.  She had no boy friend or husband, and claimed she did not want one.  Given that she earned about $5.00 USD a day, and must somehow get to her work station at the front desk for Check-ins for her eight hour a day shift, Dr. G was impressed how she put forward a smile and positive attitude, even when Livermore asked her to perform tasks well outside her assigned duties as a front desk receptionist. She and the cook opened the kitchen and prepared dinner for the pair, and Pixilee performed the job of waitress while trying to manage the front desk.

So, in the spirit of Christianity and his personal junkyard dog’s mix of religions, Dr. G gave Ms. Pixilee after dinner 100 Rand (about $8.00 USD) from his secret stash of fun money, along with his business card, and told her, “Use this small ‘thank you’ money to do something nice for your daughter.”

He later said when asked why he had gotten religion or been so nice, “Maybe in the next sleeping place I’ll find the usual front desk receptionist, one who will have reasons to deny carrying out unusual demands or requests to perform tasks outside their duty assignments.  Hopefully Ms. Pixilee will remember me as a kindly old American motorcycle tourist who might have had a touch of Christian ‘better to give than receive’ in him and not simply another demanding old tourist. But then again, maybe not. I am old, piloting a motorcycle and an American tourist.” 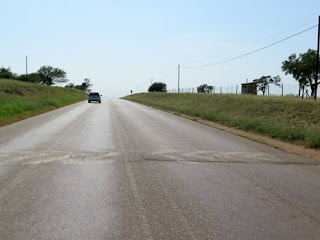 The photo above shows a speed bump, one way that vehicle speed was controlled in Swaziland.  The offending bumps, if hit at speed, could loft a speeding car or motorcycle high into the air and out of control upon landing. Speed bumps were quite common in Swaziland, some well marked, others almost invisible, and another reason the adventures chose not to drive at night -  the speed bumps could not be easily seen and thus night driving was even more dangerous.

Entrant # 7 was still learning to qualify information received from non-qualified outside sources.  One morning a first time tourist to Swaziland from the Netherlands told him to “watch out for the road police,” implying an overabundance of traffic enforcement officials on the road the pair was using to cross Swaziland. Livermore slowed their speed to 90 kph when posted speed limit was 120 kph, worried by the advice he had received from the Dutch tourist.  The net result was no speeding tickets, but that was more from the fact that the speed bumps controlled their speed rather than driving well below posted limits.  The real no-ticket factor was from border to border in Swaziland, not one policeman, traffic enforcement officer or radar device was seen. Again the pair was reminded of Fake Information, and that they needed to qualify their sources of information. For instance, “What verifiable knowledge did a first time tourist from the Netherlands really have about driving conditions and speed enforcement ahead on the roads in Swaziland?” 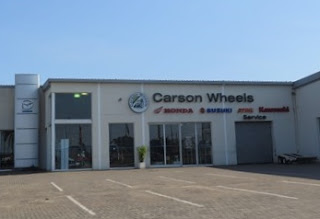 The photo above was a surprise when they saw a Honda, KTM, Suzuki and Kawasaki motorcycle dealership in the middle of Swaziland.  A surprise because crossing Swaziland the entrants had seen no Suzuki, Honda, KTM or Kawasaki motorcycles and the per capita income level of the country seemingly would not support these types of luxury items. Dr. G, always the economist analyzing and wondering about the economies of the countries he passed through, noted, “There must be some serious but well hidden wealth here, not only to support this kind of motorcycle business, but also that huge modern casino and hotel complex we passed, both business ventures requiring a sizeable uptick of disposable income from the mean.” 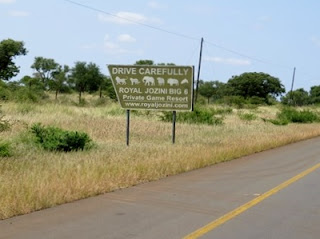 Passing the above sign, Dr. G made a questioning sign to Livermore traveling behind him, wanting to know if Livermore wished to stop and take a safari tour viewing of the Big 6 the sign advertised?  Livermore waved him on, preferring to exit Swaziland and arrive sooner than later at their booked South African hotel for an early dinner.  One could conclude that as long as the pair could keep to their routing schedule, significant priorities that included Wi-Fi, hotel eating and sleeping, (indicators of serious Soft Butt characteristics) no lion would feast on one's Kansas soft butt.
The team exited Swaziland and re-entered South Africa, this time carefully following instructions not to film or photograph Immigration or Customs officials at the border.

A follower of the pair on the Internet posted, on the condition of anonymity because they were not authorized to discuss the matter; “You Soft Butt adventurers seem to be digitally motorcycle adventuring to eat, or eating to Soft Butt motorcycle adventure, not knocking down 1,000 miles or even 500 miles a day. Internet riding short hops to sleep and eat, sleeping and eating to Internet ride the next day, therefore clearly not 'the toughest riders in the world.'”

While the Soft Butts rested themselves and their motorcycles at a beach side resort and scored extra points for being five star soft, they were mapping out their next deviation from a direct route along the coast.  Their route would take them out of South Africa again and through the Kingdom of Lesotho, much further from Kansas, USA.
Posted by RTW MOTORCYCLE ADVENTURE RALLY at 4:52 AM