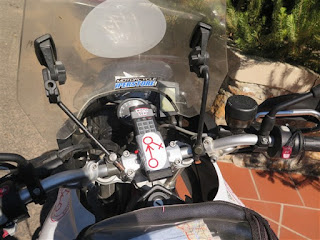 To be one of the worlds softest butt riders took detailed planning, starting a year before the actual road riding began.  Time had to be carved out of a personal work schedule for one entrant while the other timed his plug-pulling for retirement to coincide with Africa riding dates.  Plans for motorcycles for the Soft Butt Adventure Ride had to be computed and compared for shipping, buying, renting or borrowing.  Farkle, bling and electronic gizmos check lists were compiled. Riding gear needed to be procured and tested. Acquaintances who wanted to join the two-rider team of #7 and #9 were interviewed, accepted or rejected.  Money needed to be banked, bills prepaid, airline tickets booked and pre-existing medical conditions managed or delayed.

In the equipment category, there was enough time to conjure a motorcycle helmet specifically for use in Africa, the SAFARITOURO adventure helmet.  A foreign design team who were traveling the United States promoting themselves as two of “the world’s foremost adventure motorcyclists” were used as examples of Internet marketers trolling for fame and fortune at the expense of inexperienced or ADV Wannabes. Their prototype Africa helmet was eventually rejected and offered for sale at $4,999.97 with a rumored buyer having been a Hollywood television personality known to collect cars, motorcycles and memorabilia.

Upon receiving their Top Secret Soft Butt Rider’s Kits in Cape Town from Paul Blignaut, proprietor of the well respected “Professional Southern African Motorbike Rentals and Tours” company (www.gsafrica.com) , the navigator of Team Soft Butt, #7 happily applied his “E.T. phone home” talents to the mapping of their projected 7,000 kilometer route.  When done, he noted that while their route was being ridden over a five week period, the Internet had told him it could be done in less than 60 hours.

To a less knowledgeable adventurist, the difference between 60 hours and five weeks could seem WTFOT.  One observer said, “I could push my motorcycle over your route faster than you wimps from Soft Butt Land.”
Neither Soft Butt entrant expressed any ego damage from the conjecture.  They knew they had factored in some extreme adventure elements the uneducated observer knew nothing about, like the 10,000 steps one was trying to walk each day for exercise.  With his priority for security, safety, and daylight, he wanted not to be outside of the hotels or sleeping places after dark, so the steps usually had to be done within their daylight riding days.  To insure daylight walking safety, short riding days were scheduled.  For instance, one day of motorcycling between Witsand and Heidelberg, South Africa, started at 10:30 AM and ended after 26 miles of macadam, giving the walker plenty of time to step off his 10,000 steps, and make-up for a few shorter days when sundown beat him to his10,000 mark.

When the "10,000 stepper" (Livermore) was told that the 10,000-step practice was a BS plan for fitness, merely a marketing tool and gimmick from the 1960s from a Japanese company selling a pedometer called the "10,000 steps meter" and there were no scientific studies to support that number of steps being good or bad, Livermore ignored the truth and kept 10,000 stepping instead of riding. He said he had read it was good fitness training on the internet.  It reminded Dr. G of the same information Livermore had read on the internet that recommended putting four quarts of oil in his two quart volume motorcycle, even though Livermore owned a half dozen of the same year, make, and model motorcycles and later said he "knew" they only needed two.

While the Soft Butt stepper/hiker was logging his 10,000 steps, the other one of the pair used the daylight hours to explore with his lightened motorcycle (luggage stored in the hotel room for the night) unpaved roads and mix with the locals.  These deviations from straight line riding gave the pair private time apart.  One could phone home and friends, post to his Facebook account, surf the internet or watch some the 5000 books and 200 movies he'd brought with him or had access to on his digital devices while the other rode gravel roads and contemplated how to respond to questions raised in the mainline press about Fake news and journalistic ethics, a newsworthy topic which had seemingly not missed the jungles of Africa.

Another rule that was factored into daily distances was “No riding after dark.” This often equated to finding Soft Butt quality sleeping and eating places before 2:00 PM when rooms were generally available for Check-in.  One of the pair liked to check-in to a Soft Butt hotel, go for an afternoon swim in a sanitary swimming pool, do his 'E.T. phone home' and then be at the hotel restaurant at opening time for dinner, and often breakfast.  It was not unusual to find him locked inside his room at 8:00PM with a Do Not Disturb sign on his door until 8:00AM. This schedule equated to less than 10 hours of riding time each day.  Some days no riding time was accomplished when a hotel was found to offer amenities like a safe beach, laundry, or high speed Wi-Fi and the duo decided to layover for another day of 10,000 plus steps and touristing.

Touristing?  Like stopping, parking the motorcycles and visiting an elephant park?  Not for the Soft Butt Adventure Ride.  A motorcycle tour company advertised the “Ultimate GS Adventure in South Africa,” and #7 and #9 had GS Adventure model motorcycles and could have taken the elephant adventure but opted instead to be tourists through a motorcycle museum.  The tour through The Motorcycle Room (www.themotorcycleroom.co.za)  on Thesen Island, Knysna, let the Soft Butt entrants inspect and touch a wide variety of motorcycles versus walking among elephants, and let them tout “We’re motorbikers, not elephant hikers.”

Upon completion of the Soft Butt 7,000 Adventure Ride, Paul Blignaut and his GS Africa team put on a braai (barbeque), congratulating the pair.  High fives were given, swill flowed and tales were told.  #7, with the help of some wine, proclaimed that he was ready for the next segments of the pair’s ride around the world, Europe and Asia, agreeing that he had overcome some of his risk adversity and the saying that seeking trouble sometimes created a capacity to handle it.
As the clock passed well beyond the usual 8:00PM “Do Not Disturb” time that night, I reflected on our Soft Butt days, remembering years ago being told that to find adventure one must look for trouble.  Africa the Soft Butt way had some weird adventures, far from the Ultimate GS type being marketed to the motorbike group tourists.  We were away from our hotel rooms, after dark, and being 2,000 steps downhill to our hotel might be added to the list of risk aversions.

The Soft Butt Adventure Ride had been recounted at www.bit.ly/1QhmgA1, starting with the April, 2016 “Planning.”  As always the scribe has tried not to let facts fog a good tale of an adventure on the road around the globe.

[END]
Posted by RTW MOTORCYCLE ADVENTURE RALLY at 5:56 AM