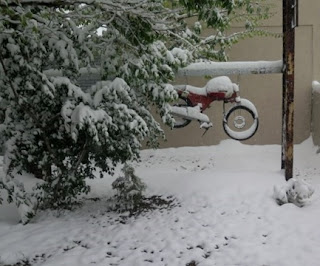 The cold and snow pictured above is what welcomed Dr. G back to the USA for his pit stop.

Abandoned in Cape Town, pit stop in Frankfurt, more secret plans away from the motorcycle paparazzi

After having been abandoned in Cape Town, Dr. G had a six hour flight in economy class (he described it as the “cattle section”) to Addis Ababa, and then another six hour economy flight to Frankfurt, Germany.  On one flight he was seated in a tight narrow aisle seat next to a mother with a screaming child, their seats in front of the always busy economy class toilets. On the next flight the man sitting behind Dr. G had a cancer-like lung cough, hacking up lungers for most of the six hour flying time.  With the nine hour layover in Frankfurt, Dr. G had enjoyed nearly 24 hours reflecting on having been abandoned by his riding pal #7. He concluded his situation was much the same as was faced by Carl Stearns Clancy 113 years earlier when Clancy’s riding pal, Walter Storey, abandoned him in Paris, France.

Dr. G said of having been abandoned by his riding pal, and faced with continuing on solo around  the world, “I believe Dave Barr, in the Introduction about Clancy’s record setting first motorcycle ride around the globe, realistically reflected what my situation was like in the book MOTORCYCLE ADVENTURER (http://bit.ly/w39HNg) when he wrote:

“Grit and determination — these two men, before they started out and during the first part of their trip, had a sense of adventure. From what I’ve read I don’t think his friend, Storey, was fully prepared how great the adventure was. Obviously Storey wasn’t a motorcyclist to start with and it seems he just didn’t have the bottle for it, I mean, the falling off and having Clancy come back and ride the motorcycle, it just didn’t sound like Storey was a man with a lot of pride and determination. I can only guess though. Then when he left Clancy, who knows, maybe he wrote a letter home to have a “Come home” letter catch up with them saying, “Hey, call me home,” and he then had a way to weasel out of the rest of the journey. But if he really wanted to make the adventure and stay with his friend he would have. He didn’t. What I do see as being devastating was when Clancy got used to traveling with Storey, you know for better or worse, he would have been used to him, and it’s like the devil you know. When Storey left, there’s a part of Clancy that was gone, and he was truly on his own. We have all traveled with people we got along well with and we’ve been through some hard stuff—the weather, the road, living conditions, border crossings, a lot of uncertainty, and we come to learn how much we can depend on the other person, how much of the load they can carry. Then one day you say goodbye, and you never see each other again. A part of you goes with them, and then you’re traveling differently. We have to learn to handle that emptiness well because that is who we are, but it still would have been tough for Clancy to soldier on alone once Storey left. But at the same time, we have had it happen to us a number of times and we just carry on alone, no problem, whereas he didn’t start out to be a lone traveler. He had to make an incredible adjustment. We have also seen from what the man did afterwards that he was not the type of guy to quit under any circumstances, unless he was killed. This guy Clancy would have done the ride around the globe no matter what, because when he put his mind to something, if he felt it was worthwhile, he was in, boots and all. You can see from his record afterwards Clancy was an achiever. And when he put his mind to something he did it.” 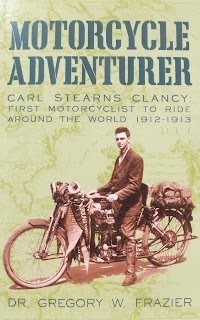 As Clancy kindly wrote of Storey’s abandoning him (Clancy was 21 years-old, Storey was ten years his senior), “At this point Storey was imperatively called back to America and, knowing no one to take his place, I determined to continue on “around,” all alone,”

Dr. G kindly said of # 7’s decision to return to the USA and abandon the ‘round the world ride, “He became fearful of what lay ahead, I could smell it on him from the day we landed in Colombia. Whether it was, as he claimed, upon the advice of his attorney, or severe trepidation based upon his own interpretation of an expired Travel Alert from the US State Department, either way he became a self-imposed DNF (Did Not Finish) on February 26. I’ll determine whether I can manage to continue on ‘around,’ alone as did Clancy.  I’d previously carved the time out from my work schedule and turned down other requests, so now it will be conjuring how to change the plan from two adventurers to one, plus financing the expedition.” 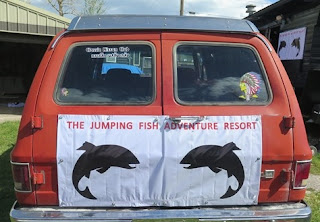 Dr. G returned to his “Top Secret – Eyes Only” USA base (photo above) at The Jumping Fish Adventure Resort, far away from the motorcycle paparazzi, and began making plans for the additional 3,000-4,000 miles across Europe and Asia needed to bag a complete loop of the globe.

A paramount economic decision was whether to ship one of his own motorcycles to Europe, make roadworthy one he had hidden there 10 years before, buy one in England or rent a motorcycle for use in Europe.  Shipping was estimated to be $2,500.00 and time consuming. Making roadworthy his own motorcycle was estimated to be $1,500.00 plus a significant number of days to make it roadworthy, only to again store it once the European leg was completed.  Purchasing a motorcycle in Europe was possible, but something meeting his minimum requirements would start at about $3,000.00 and the paperwork to make it legal could be prohibitively time consuming.  That left the option of renting, which had previously been part of the two person plan. Two rentals had been reserved. Renting would save a significant number of days, allowing for mileage requirements to be met by the “return to USA target date of July 2.”

Financing the balance of the ‘round the world ride was another 'stumbling block.' Dr. Gs' options ranged from selling assets at bargain basement prices due to his limited time frame, borrowing money, or securing sponsors (Dr. G described that option as “begging” at the last minute, an unpalatable option for him). One book publishing opportunity presented itself, a possible way to recoup borrowed funds. During Frazier’s pit stop he prepared a requested draft outline of a book with the working title of THE LOST MAN, first to be published in Thailand, a recounting of his travel experiences with a man lost outside his home element of America on a global motorcycle ride. He said of the book option, “Geoff Hill taught me a few tricks, gave me some tips, on the Clancy Centenary Ride (http://bit.ly/n6bXGX).  Upon completion of Hill’s ride around the world he wrote the book IN CLANCY’S BOOTS (https://amzn.to/2pT4bP7), a reflection of his global loop. THE LOST MAN could be done the same way, with a few similar characters.” Dr. G laughed and said “However, I might add more sex, drugs and rock ‘n roll to pimp book sales.” 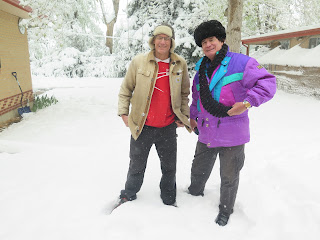 While on his pit stop one of Frazier’s BIG DOG fraternity associates, Jeff Alleman, prepped Dr. G for his possible crossing of Russia (Alleman left in the photo above, Frazier right) with some time spent in cold snow.  Alleman said, “June in Moscow could still be cold and wet.  If you’re going to use a German motorcycle, coming out of Germany, to cross Russia, remember that the cold was what stopped Hitler’s plan for Russia.  You might want to re-route yourself across Asia through a more southerly route, warmer and closer to the equator.”
Early in 2010 Frazier said, “I’m out!” after reaching the shores of the Indian Ocean on a beach in Java. He stopped that attempt at a 6th ride around the world and was quoted as saying:

“I’m not done tasting the environments, economies and cultures of the world from atop a motorcycle.  There are still plans to attempt reach distance places, as well as to return to some I want to see more of, like Colombia and Brazil in South America, as well as more of Eastern Asia and Africa. I merely plan to quit this foolish squandering of travel funds to transport motorcycles over water.  75% of the earth is water and the increasing costs and bureaucratic hassles associated with transporting motorcycles to the remaining 25% have been seriously cutting into my remaining travel years and project budgets.”

With his credit cards cleaned to -0-, a revised plan and route for Europe and Asia, and a motorcycle reserved on the continent for Europe, Dr. G said, “I often laugh at myself, not taking myself too seriously, but prefer to be an achiever, don’t want to be a loser, to fail, DNF during this second attempt at a 6th ride around the world. I did that once before, self-imposed a DNF, and it didn’t taste very good afterwards. I tried to blame my personal weakness on others, anything but admitting I was a loser, just giving up, didn’t cowboy-up as we say in Montana. This time I am firmly committed.  However, I suspect my future eating and sleeping will be at the lower end of the cash budget scale, but if I move fast enough I may be able to stay ahead of the credit card charges for airline tickets, gas and tolls.”

In an interesting turn of words regarding manliness and determination, in THE GASOLINE TRAMP (http://bit.ly/2qpizmi and at Amazon), a previously unpublished manuscript by Carl Stearns Clancy recounting of his 1912-1913 ride around the world,  in the second to the last paragraph in the final chapter Clancy wrote:

The last paragraph in THE GASOLINE TRAMP reads:

The truth of the old adage, “Where there is a will there is a way” has been proven once more.

(Next: After a return flight to Frankfurt, Germany it will be trains, cars, taxi cabs and eventually an extended motorcycle adventure in Europe.)

Posted by RTW MOTORCYCLE ADVENTURE RALLY at 12:32 AM