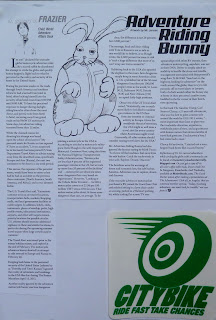 “I’m out!” declared the wannabe global motorcycle adventure rider. Like a scared rabbit he abandoned his attempt to circle the globe and quickly bunny-hopped a flight back to what he perceived as the safety and security of his home in the United States.

During his previous weeks on the roads through South America and southern Africa he had scurried from hotel to hotel, often locking himself into the security of his hotel room from 8:00 PM until 8:00 AM.  To limit his perceived exposure to danger during daylight riding hours he often chose the most direct, and paved, route from hotel to hotel, while vectoring away from gravel roads on his BMW GS motorcycle. Some days his adventure riding traversed fewer than 25 miles.

While the claimed reason for aborting his attempt was based upon the advice of his lawyer, (“My personal assets for Russia are too exposed if I have an accident.”), it was suspected he or his family had interpreted US State Department Travel Alerts to advise staying away from the described areas, specifically Europe and Asia (Russia), his next two continents to be done in a six week period.

This excuse, the exposure of his personal assets, would have been no more or less had he had an accident on the previous three continents (North America, South America, and Africa), so that excuse was deemed feeble.
The U.S. Travel Alert said, “Extremists continue to focus on tourist locations, transportation hubs, markets/shopping malls, and local government facilities as viable targets.  In addition, hotels, clubs, restaurants, places of worship, parks, high-profile events, educational institutions, airports, and other soft targets remain priority locations for possible attacks.  U.S. citizens should exercise additional vigilance in these and similar locations, in particular during the upcoming summer travel season when large crowds may be common.”

The Travel Alert had been initially issued prior to the winter holiday season, and expired at the end of February.  The motorcycle adventure bunny had aborted his attempt to ride onward to Europe and Russia on February 26.

Hopping back home to the perceived security of the United States (referred to by Dr. G as “Dorothy and Toto’s Kansas”) ignored the reality of extremists and bombings in the USA like that during The Boston Marathon April 15, 2015.

I had to laugh at how much of a bunny he was, knowing that he had grown up on a farm in Indiana and would often leave his home with nothing.  Now in his 70's he would not go anywhere without a device linking him to seemingly every imaginable support or convenience, his left thumb over the Panic App back to his wife or son.
Another reality the motorcycle bunny had ignored was that of how dangerous was piloting a motorcycle in the USA.  According to articles by motorcycle safety guru David Hough in the well-respected Motorcycle Consumer News, using data from the National Highway Transportation Safety Administration, “Motorcycles are less than 4 percent of the registered passenger vehicles in the US, but we rack more than 20 percent of the fatalities” and “…motorcycles are about six times more dangerous than cars, based on registrations.”  However, “Looking at the Vehicle Miles Traveled … for 2014, motorcycles come in at 22.96 (deaths) per 100 million VMT versus 0.85 for cars.  That makes motorcycles about 26 times more dangerous than cars, on average.  To be clear, the difference is not 26 percent, but 2600 percent.”

The message, loud and clear: riding with Toto in Kansas was not as safe as one would like to believe, or as Hough wrote, the 2600 percent increase in risk is “such a huge difference that most of us can’t wrap our brains around it.”

Rabbiting back to the USA also ignored the elephant in the room: how dangerous simply being in some American cities is.  On a published list of the 50 most dangerous (murders per 100,000 people) cities in the world, St. Louis (#15), Baltimore (#19), Detroit (#28) and New Orleans (#32) occupied fairly high positions.

Observers of the U.S Travel Alert noted, “Statistically one is much more likely to be killed in random gun violence in the US than from any terrorist or criminal activity in Europe. Given the worldwide threat of terrorism, the USA might as well issue a travel alert for every country where Americans might travel. Conversely, all other nations should consider issuing travel alerts for the USA.”

Mr. Adventure Riding Bunny had also ignored the famous saying by Mark Twain: “So throw off the bowlines. Sail away from the safe harbor. Catch the trade winds in your sails. Explore. Dream. Discover.”

The bowlines were the warnings of doom and economic loss, the safe harbor, America.  Adventure was to explore, dream and discover.

If the wannabe adventure motorcyclist purchased an RV, joined the Good Sam Club and relished sitting in a lawn chair under an awning, parked in the Wal-Mart parking lot, while trading flat screen TV one-upmanship’s with other RV owners, then adventure motorcycling, anywhere, was not in their motorcycling DNA.  Better to simply admit an inability to handle the stress and trouble management associated with Steppenwolf’s song Born To Be Wild: “head out on the highway, looking for adventure” on the roads around the globe than to try to fob their paranoia off on travel alerts or lawyers, both of which would rather the bunny stay at home in their perceived comfort zone, huddled in the far corner of their hutch, nose quivering.
In the book THE GASOLINE TRAMP, Carl Stearns Clancy, a 21-year-old adventurer, who was the first to pilot a motorcycle around the world in 1912-1913, wrote, “…more important than fame or glory was the invaluable education, experience, worldwide point of view, and acquaintance with human nature that eleven months of travel had given me.  I had started a boy, I had come back a man.”

Clancy did not write, “I started out a man, hopped back home like a scared bunny.”

Reflections of “Dr. G’s” current adventures while circling the globe with a motorcycle can be found at rtwmotorcycleadventurerally.blogspot.com. Or, just get a copy of his all-color coffee table book, Down And Out in Patagonia, Kamchatka And Timbuktu, available at MotorBooks.com.  The Good Doctor noted, after making a presentation at The Adventurers’ Club of Los Angele, that an esteemed member opined, “Today, if seeking adventure, one must look for trouble,” not run from it.
[END Published Column]
Posted by RTW MOTORCYCLE ADVENTURE RALLY at 3:40 AM