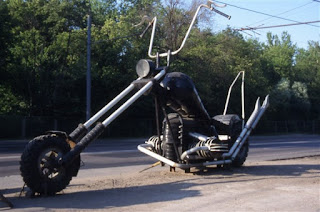 Pictured above was motorcycle artwork on the Dr. Gregory Frazier Motorhead List to show Richard C. Livermore (# 7) in Moscow, seen here outside the headquarters of the “Nochye Volki” (Russian for "Night Wolves").

Dr. G’s plan for crossing Russia in June was scrapped after “the pooch was scrooched” by the DNF’d # 7 when #  7 canceled reservations and deposits for a BMW motorcycle to cross Russia to Vladivostok with the motorcycle being returned by cargo train to Moscow.  It had been a well conceived plan using information and recommendations from numerous other motorcycle travelers who had crossed Russia along the same route and the expertise of a Moscow based motorcycle tour and rental operator, Motorcycle Tours in Russia www.rusmototravel.com While six months of detailed and negotiated planning was “scrooched with the pooch,” the obstacles it created made looking at a solo crossing of Russia by Dr. G nearly impossible.  The owner/operator of Motorcycle Tours in Russia, Alexander Nikonov, offered his condolences to Dr. G, but said he understood the differences in human and moral qualities of the two players and offered to Dr. G, “You are welcome anytime!” 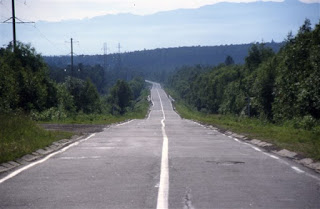 Pictured above is how much of the main (and only) road across Russia would have likely still looked.

Plans to re-visit the Night Wolves base in Moscow also had to be scratched, as were other adventurous stops across Russia in the one month time window. Compounding the pooch scrooching problem was the timing of the cancellation of the deposit and reservations was the length needed for Russian visa requirements.


In February of 2016, while Dr. G and Livermore were in Buenos Aires, Dr. G suggested that due to the fluid political climate in Russia they might want to consider changing the crossing of Russia to June of 2017 after finishing Europe, meaning it might become more difficult paperwork and visa wise due to declining relations between the USA and Russia.  To this suggestion Livermore readily agreed, saying, "Yep, let’s do it!" but added “I have to be back by July 6 for a family reunion.”

Plans were adjusted to accommodate the suggested change and Dr. G carved out the needed time from his 2017 work schedule, turned down other assignments and projects.  Livermore was more flexible in needing to change the Asian crossing because he would be retired by early 2017.


As Dr. G reviewed other options for crossing Asia given the timing window of June, and possibly far more dangerous ways, like through the Middle East, he was reminded and encouraged by several random thoughts passed on from previous adventure seekers and current Rally followers:

“Fear easily overrides pride. Finish your adventure, demonstrate your pride, and not fear.”

“You are no quitter, no baby wailing for a teat. Keep heading east old man.”

“If you want to be afraid, life is dangerous anywhere.”

“No shit! I can say that (so far) I have never scammed, shorted, duped or backed out of my word of money issue.  On the contrary I feel I’ve overpaid and went above and beyond the call of duty many times, it just feels better.  That’s a shame.”

"From your former partner's Facebook post ‘Had a great ride for 6 weeks and never had a single issue with anything,’ after Africa, you seem to be on far different mental, physical and moral tracks around the world.  Keep on the path you are on across Europe and Asia! You obviously are having more adventure and fun on the higher ground, although without the 10,000 steps each day.”

“Are you crazy or fearless? The difference between crazier and Frazier is only the first letter of each word. Some say your solo adventures have made you bat shit crazy, or crazier than a shit house rat.”

“At least you’re done with sitting around the campfire behind the gated Hilton Hotel singing Kumbaya like it seemed you were in South America and Africa with Livermore.”

“Harvey Milquetoast is back in what you have dubbed as ‘Dorothy and Toto’s Kansas.’ Adventure is over the horizon, not locked in a hotel room 12 hours a day connected to the Internet sucking down false information and posting, posting, posting.”

“I doubt you have ever been a victim of your own fear.”

“There are lone wolves and docile sheep, even in Kansas. We know you are no docile sheep.”

As he approached Turkey, Dr. G was faced with several economic and bureaucratic problems that meeting his long planned July 2, 2017 return date to the USA made impossible.  Iran would require a permit to transit, visa and for Americans, a paid guide.  Pakistan and India would both require a Carnet de Passage, a bond he could not easily secure on a timely basis from Europe. 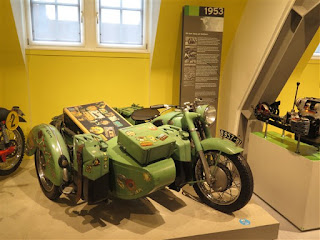 A sidecar driver of the sidecar pictured above in 1953 had faced much the same route dilemma as did Dr. G, when the route across Asia was much more difficult and dangerous, and succeeded. A review of the route taken by the Zundapp showed that the adventurer had given “Dorothy and Toto’s Kansas” a wide berth.
And then there would be crossing Myanmar, a relatively new possibility for a solo traveler on a motorcycle.  Dr. G had managed a motorcycle journey within Myanmar several years before and had some connections. Reality was at his late date he was looking at stressful paperwork, a handler, guide and bureaucratic requirements, plus having to pay $3,790.00. 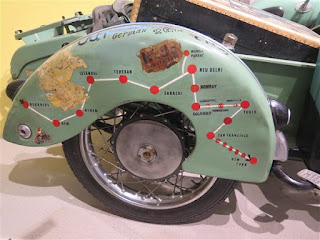 The route taken by the sidecar driver in 1953 showed much time was spent on boats.  Dr. G considered simply packing his riding gear, and using credit cards while looking down at the land mass below from 35,000 feet, using a much quicker airplane.

After exiting Myanmar, Dr. G would face nearly the same bureaucratic and economic burdens to cross Thailand, at a minimum three days with a guide for $1,500.00, only to bump up against Cambodia, Laos and almost a “no-go” of Vietnam given his time constraints.  Over the previous 15 years he had explored all of those countries, some numerous times using a variety of motorcycles, but knew that the timing and economics to do so again caused by the scrooching of the pooch of the Russia plan was going to be beyond burdensome.

Needing less than 1,000 miles to meet his global target of 18,000 miles, and having less than a month to do it, caused “Dr. Crazier” to come up with a firm Plan C: Why not merely fly over the countries between Turkey and land in Thailand where he could easily save $1,000’s as well as days while being joined by other avid rally entrants on a “run through the Thai jungles?”

Another niggling factor in Dr. G’s Plan C was a broken tooth.  An old filling had dislodged and exited from a rear molar, leaving a gaping hole and sensitive exposed nerve.  Having experienced a similar problem before in Germany Dr. G knew the economics of having dental work done while on the road in Europe, where he said, “I could purchase a new motorcycle in Thailand for the price of having a dental crown done in Europe.”

He again fashioned a filler for the hole in the tooth from epoxy glue as he had done some years before with a similar problem in Vietnam and hoped to make it last until he could reach his personal dentist’s chair in Thailand.  Dr. G said, “I saw dental work being done with vice grips and a kitchen fork on the street when I was in India and figured the same would be done in a similar fashion in Myanmar or Pakistan.”

Dr. G did some quick research.  First he discovered the airport he would be initially landing at in Thailand, Suvarnabhumi International Airport, had recently been listed as one of the 10 worst airports in the world.  Looking back on the departure of his former riding partner, he said, “That would not meet Livermore's standards, but I’ve been to too many good airports so far, boring and stale.  I’ll give Suvarnabhumi a try, even though it’s not up to Dorothy and Toto’s standards.”

Next was another Internet report that stated that in Thailand, on average, 5,500 motorcyclists die annually, or 15 deaths per day, thereby scoring Thailand as the world’s deadliest country for two wheel motorcycles.  Dr. G said, “Whoa now! Here we’re talking about some real motorcycle risk management and testing of professional driving skills, an element of danger far from that of Dorothy and Toto’s Kansas.”

And then popped up a tourist report that ranked Thailand as one of the 20 most dangerous countries in the world.

This resulted in Dr. G saying, “Well, if it’s on the Internet, many like Livermore say it must be true, so l’ll pretend outwardly for the fake news outlets that my previous traveling partner taught me to believe what is out there on the Net as he did. Instead I’ll dodge the drones and paparazzi, throw caution to the winds and make a crazy dash to finish the Rally! It appears I’ll be as far from Harvey Milquetoast, Dorothy and Toto in Kansas as I can get, pushing a crazier adventure motorcycling envelope.”

The below photo was sent to Dr. G from a Rally follower and supporter from the USA, suggesting he ignore the dire warnings of being outside the USA, with the following quote: “True motorcycle adventure is inconvenience successfully managed away from a Starbucks or roadside assistance plan.  Go with your Dr. Crazier Asia Plan! ” 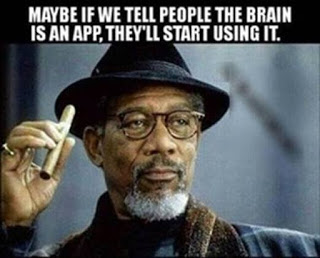 (Next: After a return flight to Los Angeles, the around the world dots will have been connected, having initially departed from LAX June 2, 2013.  In the meantime, next see how Dr. G “managed” adventure and his remaining miles through The Land of Smiles.)
Posted by RTW MOTORCYCLE ADVENTURE RALLY at 12:24 AM