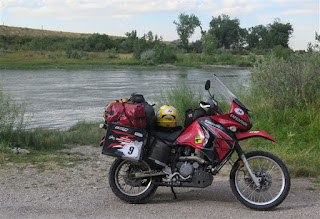 Dr. G had been a hard-to-hit-moving-target for an interview since he landed in Los Angeles.  This photo finally captured him arriving at his home base after having logged another 3,000 miles in the USA since July 2, the official End of his sixth motorcycle ride around the world.

Retracing Dr. G’s adventures over the last 3,000 miles found him taking time out to research some seemingly esoteric items like how bill collectors from Colombia deal with con men and debtors (“We have someone give them a visit!”) and trying to locate a long missing BMW R100 GS in Mexico.

A three day stop at the 27th running of the big dogs, known as The Big Dog Adventure Ride www.horizonsunlimited.com/bigdog  found Dr. G off loading his travel gear and joining the event.  The fraternity of like-minded adventure aficionados shared high Colorado Rocky Mountain motorcycling, monster two-inch thick T-bone steaks and seminars from the road around the globe.  Dr. G gave a rolling symposium titled THE LOST MAN: MOTORCYCLE TRAVELING THE GLOBE WITH A 21st CENTURY UGLY AMERICAN, with solicitations from the audience for contributions towards an eventual novel and screen play collection of ugly American character tales. 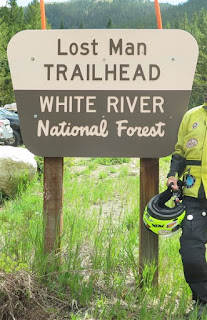 Reflections and an in depth roadside analysis of the psychological make-up were made by two of the Big Dog entrants who spent time during their three days of high mountain adventure when stopped at Colorado’s LOST MAN Trailhead pictured above.


During the Big Dog Adventure Ride one entrant managed to allow his BMW F800 GS motorcycle fall on his leg causing a compound fracture. While earning  the award of "Best Ride Out Of Back Country With A Broken Tibia" for having righted his fallen F800 GS and piloted it off the gnarly mountain trail, he maintained his adventurous spirit.  However, he did lament about not being able to ride to Wyoming some days later and be inside the 100% solar eclipse zone.

His lament piqued Dr. G’s adventurous spirit, especially when told that if a motorcyclist had lost or drained his adventurous mojo he could re-charge his mojo batteries by standing naked (except for motorcycle boots) in the 100% zone for the 2-3 minute exposure.


Steve, known as Big Dog Banker Busted Leg, further encouraged Dr. G to do the mojo-eclipse-rejuvenation by saying something like, “Dr. G, you’ve raced motorcycles up Pikes Peak, survived riding a BMW and Honda to the annual Harley-Davidson gathering at Sturgis, ridden six times around the world, attended two Burning Man events and even stepped in the Ganges River water at Kubella.  You really shouldn’t pass viewing the solar eclipse with the other 200,000,000, especially since you’re in need to a major mojo recharge.” 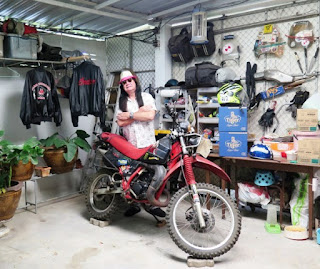 Dr. G was photogenic enough to allow this photo to be taken in Thailand. He said, “I don’t think I have any resemblance to Ozzy Osborne.  OK, George Clooney, maybe.” 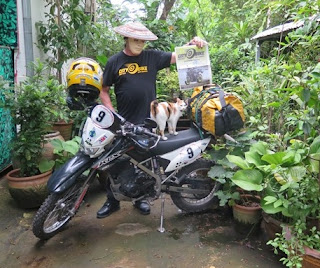 The above photo was Dr. G in deep cover, so deep that CITY BIKE magazine offered a free T-Shirt contest in their July 2017 edition to the first reader correctly identifying the rider wearing the CITY BIKE T-Shirt and displaying a recent issue of CITY BIKE above the fake baby tiger and wearing a mask.  Dr. G was correctly identified in the next issue.  However, that was not the end of the story.  Another reader later submitted their guess as the mystery rider being Charley Boorman.

When Dr. G was told he had been mistaken for “that dashing English adventurer, of long ways down, round and back,” his only comment was, “Clooney, I was going for the George Clooney look.”

Dr. G finally responded to the question of what he had learned before, during and after the completion of his sixth motorcycle ride around the world.  He said much of those teachings or awaking may be in a new publication (promised is an excerpt from one new book about how a Spanish speaking hotel housekeeper caught an American guest engaged in, as the French would say, a ‘manage a moi’ after the guest forgot to close and lock his hotel room door with a Do Not Disturb sign hanging on the outside handle) so the publisher did not want him giving the road tales and advanced reflections away for free in the interview for this post. However, he added, “a few may not make it to print, call them unpublished teachings, tips, or Motorcycle Travel Epiphanies, such as:”

"A hick wearing a first class motorcycle riding suit is still a hick."

"Money can not buy integrity, strength or class."

"Having money can make one an elitist, let them do their pretentious male swagger, trying to look and act cool, but they can still be a coward."


“When a motorcycle traveler loses his or her moral center, there is a real need for serious psychological counseling. Forget that old saying about never seeing a motorcycle parked outside the offices of a psychiatrist.”


“A man or woman's word or a handshake deal should be their bond and reflect their honor.  Once they throw away that honor under a bus for a few dollars they can be said to not be worth the skin in which they live.”

"Don't make the mistake of getting too close to people who I thought were friends, they can betray me and my trust, I can get burned."

"Our relationship had taught me a terrible thing about human nature - that to trust an other was as if I'd surrendered my own will, hoping or believing that the other would keep my safety and best interests at heart as I did his."

On racism: “A jingoistic and xenophobic racist should stay in his/her home country and state.”

And on racists: “A person of color is born that way, can’t change. A racist learns to be that way, can change, but rarely does.”

“I still do not take myself so seriously I cannot laugh, even if it is when looking in a mirror when shaving.  Keep the humor coming, it’s what keeps my blood flowing.”


"In a sense, negative experiences have darkened my world and caused the loss of trust in people who likely don’t deserve it.”

"I've learned to understand fear and how it can override pride.  I would rather regret adventures I did than the adventures that I feared to do."

"Failure and risk avoidance are bitter pills to swallow, although some persons of weakness prefer the bitter taste to the loss of their pride, characteristics I especially came to dislike in a person who professed strength."

"Being a loser or failure can be attributed to one's hubris."

"There appears to be another truth to the theory that owning or collecting motorcycles can be traced directly to some sufferers of the Napoleon Syndrome, also known as the Short Man Syndrome and Short Penis Complex.”

"A man who disguises his true nature can end up disguising it from himself.  Then it's time for him to get back on the couch and drugs after a re-visit to his psychiatrist."

"When you discover during a lengthy road trip that your riding pal is pretty far down the rabbit hole of paranoia and psychosis and been seeing a psychiatrist, you might want to download some of Carl Jung's theories to rethink how to adjust to some out-of-the-box, WTFOT quirks possible on the journey.


Next for Dr. G after successfully competing in The Great Around The World Motorcycle Adventure Rally?  “A couple of new books, two film projects, numerous magazine feeds and a podcast or two. And, as always, some more two wheel adventures somewhere on the planet, maybe bending to demands by other participants to keep soldiering on, to not wuss out as in to not do so never more. I’m also looking at global journalism issues like the one described below.  Good journalists do not want to let dirty secrets to continue to go on being dirty secrets. I can almost hear the sound of foot falls behind writers and journalists like myself who expose some of the sad truths about bad people and events in our world today:"

The Christopher G. Moore Foundation is pleased to announce that BAD NEWS by Anjan Sundaram is the winner of inaugural Moore Prize 2017, an award that recognizes works of non-fiction that advance our understanding of human rights issues. The author will receive an award certificate along with a £1,000 cash prize.

BAD NEWS exposes the dangers that journalists face in trying to report news in a dictatorship. The book shows how a climate of fear can gradually permeate everyone’s lives, destroying any attempts to tell the truth. Setting up a class to encourage local journalists, Sundaram describes how all his students end up being either giving in and writing pro-government propaganda or refusing and ending up in prison. The author ventured outside safety of the capital, at great risk to himself, to discover scenes of devastation, huts with their roofs removed because they were considered primitive, sick children and old people untreated for malaria.

At a time when governments are attacking freedom of expression and investigative journalism, we are witnessing a retreat in human rights exposure and funding. Our hope is that books like BAD NEWS will encourage others to keep the light of truth shined on the dark corners where those in power operate with impunity.

We hope that you agree that such works of literature deserve wider recognition and discussion. Publicizing the prize will bring these books into the human rights conversation. For more information about the prize, please visit our website: www.cgmoorefoundation.com/prize


Posted by RTW MOTORCYCLE ADVENTURE RALLY at 9:52 AM