COLOMBIA AND THE RALLY CONTINUES SOUTH TOWARDS ECUADOR

The two motorcycles arrived at their Colombian destination in crates constructed so well that they could have carried glass statues.  The wooden boxes were built in Miami at a small side street shop that specialized in crating.  At the crating location none of the workers spoke English, so there was considerable trepidation for the non-Spanish speaking Livermore about whether or not the motorcycles would reach Colombia 15 days later and a couple of thousand dollars after paying for the crate construction, associated air cargo costs and handing over the original ownership papers to unknown third parties.  Each crated motorcycle passed through several inspections, like the US Customs checking the Vehicle Identification Numbers, and therefore the boxes needed to be open enough for inspectors to see what was inside, so the tops were a see-through plastic film supported by a strong frame. 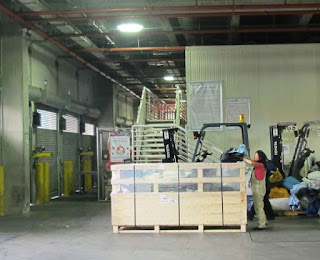 Pictured above, the crated motorcycles were being given a final inspection in Colombia before they could be uncrated, batteries reconnected, and for Livermore to find a container and gasoline station to add gasoline from his fully drained tank, his having ignored instructions in Miami to "leave 1/8th of a tank."  All went OK except for the final step, the purchase the Colombian third party vehicle insurance. Livermore's gasoline adventure ate into the final hours of the day prohibiting the purchase of liability insurance before the sales offices closed. The last bit of paperwork was done on the morning of the second day of what Frazier called the “get-the-motorcycles-out-of-jail-paperwork-adventure,” also known as clearing Customs.

An indicator of the cultural bumps in the roads ahead was when the air cargo person (Veronica) processing the pair's paperwork volunteered to drive Livermore to a gas station for his needed gas.  Once Livermore filled his gas tank with the 2-3 liters of gas, she then drove her personal car through the Cuustom's gate for the pair to follow, deposit their Customs clearance documents and then on to a local insurance office to leave their papers for collection the next day.  When Dr. G suggested a "tip" for the help, Livermore asked, "What for?"  Dr. G said, "For her help."  Livermore replied, "It's her job, why give her a tip?"  Dr. G then said, "No, her job stopped when you rolled your motorcycle out of the air cargo company warehouse doors.  Anything she did after that was her kindness to you for not having gas, and to us to make sure we found the insurance office before the day ended.  She was off the company clock and on her own time, using her own car and gas to get us here. I'd tip her but all I've got is $100.00 bills, a bit much.  You've got your stash of Colombian money, give her a bit."

The exchange ended with Veronica leading the pair out of the parking lot to the booked Marriott Hotel and waving goodbye, without a tip for her kindness.  Dr. G wrote her boss the next day, offering high praise for her work and additional praise for going "above and beyond," with a promise to recommend the air cargo company to future travelers. 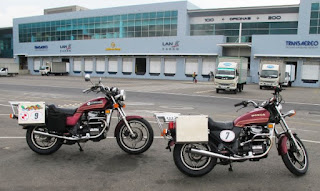 Both motorcycles are 1983 Honda GL650 models, so each was 33 years old.  As one motorcycle journalist wrote, “Any Tom, Martin or Wolfgang can purchase a new motorcycle, send or drive it to South America and ride them around.  1’000’s of motorcyclists have done it before and 100’s are doing it now. It’s really pushing the true envelope of motorcycling adventure to use a pair of 33 year-old motorcycles, models which were never imported to South America. For Livermore and Frazier there is no “safety net” of spare parts at motorcycle dealers or repair shops familiar with this model of motorcycle for the next 10,000-12,000 miles.”

Livermore made a disappointing discovery for him on Day 1, that being Frazier’s (known as “Dr. G”) Spanish was not as good as Livermore had assumed it would be after Dr. G’s two previous motorcycle rides through South America.  In Frazier’s defense, it had been 10 years since he last used his Spanish, and he entertainingly defended himself by saying:
“Hey, I remember how to say 'hello, yes, no, thank you, beer, toilet, money, motorcycle and pretty lady,' plus a few swear words. The rest of my spoken Spanish will come back in time as I need it. Meanwhile, you really need to at least learn how to speak and use at least one Spanish word, maybe 'yes' or 'thank you.'  Your using your Indiana-farm-boy-doofus-low-class-slang of 'Okey-dokey' isn't making any sense to whom you are speaking, it doesn't translate into Spanish."

Dr. G made an ugly olfactory discovery on Day 1. "I could smell and almost see the cloud of fear that surrounded Livermore as soon as we entered Colombia.  It wasn't a good smell and I could see others around him react to little fellow's stink." Reportedly human beings shed 50,000 skin cells every hour.  The cells contain trace scents from the humans' eccrine glands (known as sweat glands), and their apocrine glands, which are activated by anxiety, fear, pain and stress, giving off what is known as "The Fear Scent." Livermore's glands were apparently giving off a maximum level of Fear Scent, to the point that Dr. G tried to physically distance himself when eating. 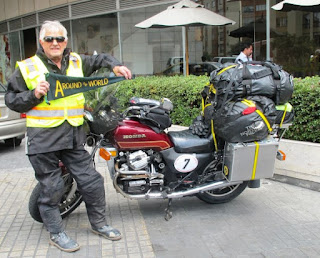 The official Start of the second leg, or stage, of The Great Around The World Motorcycle Adventure Rally was from Bogota.  Livermore displayed the cloth banner that was a gift from the Irish Team that did the Clancy Centenary Ride, celebrating 100 years after the first motorcyclist circumnavigated the globe in 1912-1913.  The banner will be carried around the world, again. There was 150 lbs. of luggage on #7's motorcycle at this Day 1 photo op.

Both Livermore and Dr. G made another enlightening discovery after the first days of traveling in Colombia: Livermore had far too much luggage = weight.  The weight (equaling, as Dr. G said, that of "a circus fat lady on the back") made handling the overloaded motorcycle through tight curves a maddening test of Livermore's motorcycle piloting skills, resulting in several crashes. Dr. G wrote to a fellow journalist, "I am thinking Livermore missed the MOTORCYCLE PACKING 101 class, maybe skipped a few chapters in the books he'd read or ignored internet offerings."

The pair spent one evening cutting down weight by giving away items or consuming what they felt was not absolutely necessary, or transferring some items to Dr. G's motorcycle.  Frazier quit carrying a liter of vodka, which he claimed was for medicinal purposes, purportedly being his bad knee, bad back, and previously broken arm, wrist, fingers, shoulder, collar bone, big toe and right leg, but kept a pint. Livermore was not willing to give up on carrying four rolls of toilet paper, his coffee pot and cook stove, but decided 10 pair of pants were too cumbersome as was a sports coat, second sleeping sac, several dress shirts, one pair of long underwear and three pairs of shoes. He started to investigate shipping the excess home, and expensive option. Dr. G agreed to carry his never-used coffee put and gas stove in the space he'd made after downsizing.

A scurrilous rumor, spread by jealous motorcycle riders stuck in their office cubicles or at home finger pecking nightly on their keyboards, needed to be dispelled.  The internet rumor mongers expressed their out-house specialists opinion that one of the two adventurers had done so much internet research and book reading prior to leaving for South America that he was carrying a toilet seat in his motorcycle luggage. "Not true," laughingly replied Dr. G, "and I suspect these trolls and toolboxes also know where Elvis is living and how deep Jimmy Hoffa is buried." 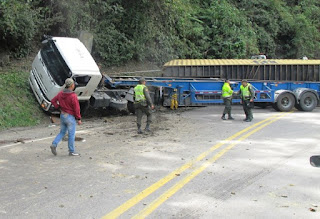 Road carnage.  On the second day Livermore saw three motorcycle accidents and several automobile and truck crashes. Earlier he was lightly tapped by a car behind him when the car was making a lane change in slow moving traffic and he was wobbling for excess weight through traffic on his heavily loaded and awkward handling motorcycle.

At a gas stop Livermore verbally expressed his having fearfully thought was what he thought was the aggressiveness of the Colombian car, truck and motorcycle drivers seen on their way south towards Ecuador.

Dr. G stopped what he was doing, looked skyward and pondered for a few seconds about Midwestern USA native Livermore’s observations regarding motorcycle riding, road carnage, and traffic in South America.

Then, as he strapped on his helmet for the next 150 miles of motorcycling, Dr. G said to Livermore, “If you were Toto, I would say 'We aren’t driving these 33 year-old motorcycles across Kansas.' You need to buck up, lighten your load and put social media well behind thinking about driving, as well as less about what you're going to post on Facebook."
Posted by RTW MOTORCYCLE ADVENTURE RALLY at 10:19 AM