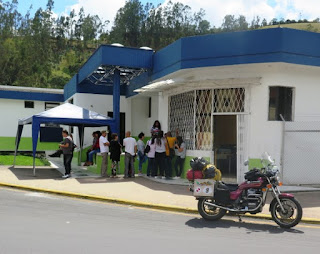 The two 1983 Honda GL650 motorcycles were so old they often did not appear on the lists of motorcycles in computer files at borders, confusing the government officials.  At this entry point the official decided the 33 year-old Honda was close enough to the many BMWs he had processed before, so he declared its value in the computer at $45,000.00 USD!

Ecuador, Paperwork, The Middle of the Earth and some Zen teachings.

Exiting Colombia and entering Ecuador was a test that began at the border with a paperwork and mental exercise.  On the Colombia side of the border the passports had to be presented to Immigration officials to cancel the entry permits obtained when entering Colombia at Bogota. It was a quick and simple process, taking less than five minutes.  Then a short walk to the Customs office where the motorcycle Temporary Vehicle Import Permits were handed through a window where the information was to be imputed into a computer canceling permission to bring the motorcycles into Colombia without paying the high import tax.


All went well until the computer crashed.  Rather than wait for a computer fix, the Customs official decided to close the office for an early lunch.  The documents were left on top of a pile of other unprocessed paperwork. Livermore and Dr. G were told, “It’s nothing. Go on over to the Ecuador side. The highly efficient Colombian government Customs bureaucracy will take care of your vehicle exit paperwork later.”

As Livermore walked away, he asked, “Do you think it will be OK, leaving the paperwork undone like that?”

Dr. G replied, “Possibly, or possibly not. If not, you can start singing that old Johnny Cash song WANTED MAN for not paying the government import tax. Let’s deal with the Ecuador side and get on down the road before the Colombian tax man starts looking for you.”

Entering Ecuador took much longer due to language barriers.  With Livermore’s rapidly expanding use of his only two learned Spanish words (“Americano" and “bano,” pronounced by Livermore as "banjo") and Dr. G’s mixed use of his poor Spanish, Thai, German, French, Italian and English, the two travelers confused government officials so badly that finally out of frustration their passports were stamped allowing them entry into Ecuador and their Vehicle Import Permits were processed after an hour. Possibly the border officials were hoping the need for an “Americano banjo” said with a Michigan accent and goofy smile in the offices would not become their need for fresh air and a good floor mopping. 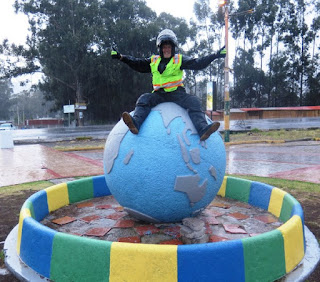 Livermore celebrated his having reached the Equator, marked by this cement globe. The rain and cold of the day did not dampen his enthusiasm for having crossed The Middle Of The Earth, even though he had touched Mother Earth (crashed his motorcycle) three times the previous day.

Livermore's use of Americano perplexed those who would ask where he was from.  His reply was Americano, not United States. The South Americans and Central Americans did not see any difference between the residents of those Americas and North Americans.  His habits would not die, even after it was explained to him he should say "United States" or Estados Unidos (Spanish for United States).  He steadfastly stuck to his two Spanish word dictionary and use, leaving a trail of perplexed bureaucrats, gas station attendants, restaurants service staff and hotel employees.

When asked about Livermore's two word Spanish cranial dictionary and use, Dr. G said, "It entertaining to a degree, watching the Spanish speaking people we meet get their perplexed look, the WTF look, especially when he asks where is the 'banjo.' At the same time it's frustrating trying to clean-up or make clear what he is saying.  It really becomes fun when he answers the 'Where are you from' question by saying, in English, Michigan.  Sometimes he'll realize they have no idea where Michigan is, so will add, 'Near Chicago.' Many know of or have heard of Chicago. A really fun time is trying to explain what he means when he says, 'I'm from Michigan, and where is the banjo?'  That adventure in language pushes my Spanish envelope towards the edge, but is funny enough to keep me and the Spanish speaker laughing after he wanders off in any direction looking for a sign that says WC."


Ricardo Rocco Paz from Quito, joined the two Honda riders with his much newer and more powerful BMW GS.  As an official entrant in The Great Around The World Motorcycle Adventure Rally, his motorcycle was the rapid hare of the trio compared to the two smaller displacement and less powerful tortoise-like Hondas. 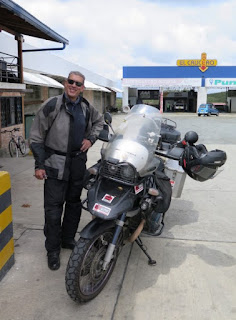 Ricardo Rocco Paz became a welcomed entrant because with his entry he brought the fluent use of English and Spanish to the rally. He also brought his great depth of knowledge of South American adventure motorcycling. 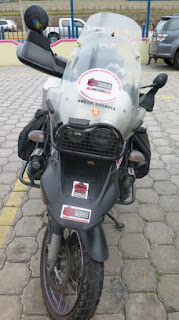 The BMW GS of Ricardo Rocco Paz was sponsored by the ESCULA DE MOTOS, the only motorcycle rider training school in Ecuador as well as a motorcycle mechanic school, both highly professional and well respected.


Piloting motorcycles in Ecuador was a chance to test the riders and their machines with modifications.  Opting for a side route over the mountains versus the main road used by most travelers, the Hondas bounced over nearly 100 miles of bad roads, which included mud, loose gravel, deep pot holes and sand while thick cloud cover and rain masked the treacherous section. Dr. G called it a test, to see how the motorcycles and Livermore could handle road conditions expected further south.  Livermore called it a different four letter English word far away from a test or riding motorcycles across Kansas.

The learning curve for Livermore was still in a steep upward swing as they traveled through Ecuador.  However, Frazier was also learning, learning to be patient with Livermore’s newness to riding away from Kansas in South America.

After watching Livermore crash when entering a gas station, Rocco said to Dr. G, "Your buddy seems to have a problem riding a moto. You know I have the training school in Quito.  It's closed now because we're moving, but I could arrange for some private learning lessons for your buddy."

"He's got a reverse learning ability.  I don't believe your motorcycle trainers could teach him anything."

Rocco, who spoke very good American English, said, "You mean he has a learning disability?"

"No, he can learn, but at his own Indiana farm boy speed and with a severe reversal of adventure riding priorities.  It seems his daily number one priority is to stay tethered to the Internet.  In Colombia I concluded his number two priority was not to be kidnapped, taken into the jungle and used as a boy toy bent over a log in the jungle or held for ransom.  He's not been focused on driving or the environments around him.  He wants to quickly get to the next safe harbor, or hotel, and lock himself in his room while being connected to the Internet."

Rocco pondered this response for a few seconds, and then asked, "So why is he trying to ride around the world?"

"He got bitten by the 'adventure' riding bug, read a book and watched some film, thinks he can fit into the adventure motorcyclist definition."

Dr. G smiled and replied, "No, he says he's been riding motorcycles since he grew up on the farm, has a collection of 12-15 of these Honda GL650's, and claims to have raced motorcycles, although not successfully."

"Dr. G, you've the patience of Job to be dragging him around.  Last time you came through here you had a grandmother with Parkinsons on the back or your moto.  This wannabe you're with now may be a bigger challenge than the Parkinsons lady."

"The Parkinsons lady was taking a cocktail of drugs to make it through each day.  This time it's me taking my doctor's prescribed mood enhancers mixed with a bit to swill to keep the patience of Job."

Livermore was adding no Spanish words to his two word communication skills, depending upon Dr. G's cranial Spanish dictionary, and both were learning to travel with another person, adjust to their way of thinking and doing things, better described as their individual Zen ways of motorcycle travel.

After one frustrating matter dealing with a bellman at a hotel Dr. G said to Livermore, " What do you call a person who speaks three languages?" Livermore answered, "Trilingual."   And Dr. G then asked, "So what do you call a person who speaks two languages?" Livermore answered, "Why, bilingual, of course."  And then Dr. G asked, "And then what do you think that bellman calls you when you yell and point at him in only one language?"  Livermore had no answer.  Frazier offered "North American asshole gringo," to which Livermore replied, "Well, if these wet backs want to get to America so much, they should at least learn to speak American." 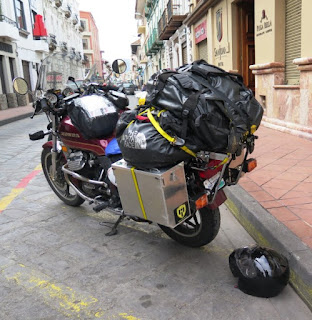 Livermore’s motorcycle helmet was photographed here setting on the ground, in the gutter, in Cuenca, Ecuador.

A passing tourist, having seen the dog sprinkling the helmet, said in perfect English, “Don’t you think the owner of that helmet might be upset?”

“Nah, he placed his helmet on the ground for some experienced reason and the dog just washed off or killed all the ants. By the time the owner returns from wherever he went the helmet will be dry, so unless you or I say anything the experienced owner’s motorcycle adventure will remain in a cosmic balance, that being The Zen Of The Great Unknown.”
Posted by RTW MOTORCYCLE ADVENTURE RALLY at 8:03 AM