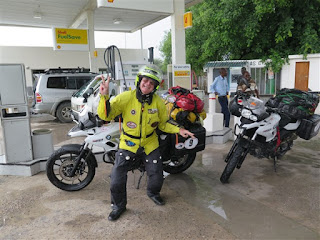 A bit of rain proved that the choice to use Aerostich www.aerostich.com Darien Suits and Combat Touring Boots was a wise choice.  Pictured above was Dr. G at an early pit stop in Botswana, happily acknowledging that his private things, like passport, money, and pleasure stick had remained dry after driving for ½ hour in a heavy rain. 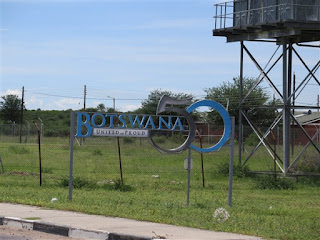 Exiting Namibia and entry into Botswana was quick and easy.  The entrants were given 30 days free entry on their USA passports, but each was required to pay 200 Rand (about $15.00 USD) for a road tax. Both were often asked by border guards and Customs officers (not immigration officials) when they saw the USA passports, what they thought of their new President elected only weeks before.  Dr. G would try to dodge the question with, “Hey, did Harold Stassen finally win?” which usually drew enough of a blank stare from the inquiring persons to allow him to walk or ride away without having to engage in a political discussion.

Having been to this part of the world several times before, Dr. G shared some of his road learnings with Livermore, cautioning: 1) Don’t engage in political discussions, 2) Don’t engage in religious discussions, 3) Don’t flash your money around, 4) Don’t speak fast. Speak slowly when talking with the locals, enunciate your words and don’t throw the person you are speaking with any curve balls by using American idioms, 5) Don’t hand anything to anyone using your left hand as that’s the one they know is for wiping your personal exhaust port after doing your ablutions, and 6) Don’t forget what the Tech Team in Cape Town told you, don’t be enticed into small talk with strangers who might be watching you flash your smart phones, GPS or money, or as they said, "Don't talk to strangers.” Dr. G closed his lesson on political and cultural correctness with, “That’s my advice, you can take it or leave it, that’s your choice, but don’t forget the old saying, “Toto, I’ve a feeling we’re not in Kansas anymore.” 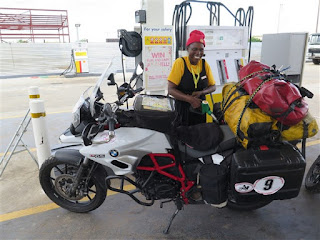 Pit stops were fun, a chance to rub/stretch and flex the Soft Butt buns, and the gas attendants were curious and friendly.  During one long stretch, Soft Butter # 9 limped into the petrol station with ½ liter left in the tank, or about 10 kilometers (six miles).  The lady attendant pictured above laughed when she was told how empty the gas tank was, and said, “You’ll not like walking in this hot sun if your gas run dry.” Dr. G pointed to Livermore, who likes daylight walks in the security of safe compounds,  and said, “He’s the hiker, I’m the biker, so if I run out of gas I will stay and protect the motorcycles while he walks to the next town. It could be an adventure for him.” 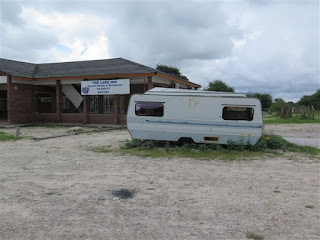 Processing information gleaned from fellow travelers, gas station attendants, and hotel employees was a constant filtering process.  Even more so when the lying Internet, free downloaded maps and hotel booking information (like the long dead hotel in the photo above) was often accepted as 100% correct by Livermore.

On one occasion the pair spent a hot 10 minutes circling a two block section of a town looking for a hotel Livermore had found on the Internet.  Dr. G, a nose-in-the-wind-traveler-Neanderthal and non-digital-adventurer or a sniff-out-a-cool-place-Luddite, said, “That place we passed three times while looking for your cyber missing Internet hotel, the one with the sign that said 'Ernie’s B & B,' looks good, next to a bar and restaurant.” 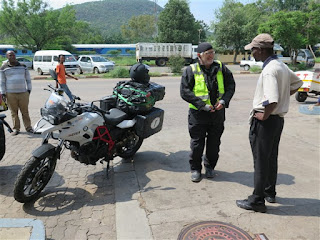 Pictured above was Livermore talking to a stranger during a pit stop.  He quickly put on his helmet and climbed on his motorcycle after the stranger said, “I want your motorcycle.” The scene was reminiscent of Clark Griswold (Livermore) asking for directions in a lower section of St. Louis at night, in the 1983 film VACATION. 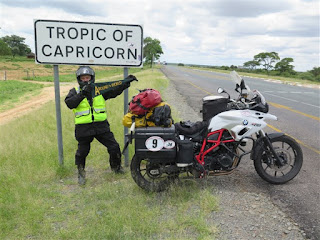 Carrying on the spirit of the Clancy Centenary Ride http://www.horizonsunlimited.com/page/clancy-centenary-ride-2012-2013 Livermore is pictured above displaying one of two pendants that were created for the 2012-2013 event.  Dr. G, author of the book about the first ride around the world on a motorcycle, MOTORCYCLE ADVENTURER and a follow-up book titled THE GASOLINE TRAMP, liked to speculate at stops like this on how Carl Stearns Clancy would have seen the world over 100 years earlier.  Dr. G sadly opined, “The days of true adventure motorcycling have been lost to the Internet.”

Upon meeting a South African motorcyclist and telling him of their crossing of Botswana, the BMW GS owner said, “Botswana is still ‘A man’s land.’ It’s a rugged country, a hard country. You’ve done well to cross it without any people or mechanical problems.” 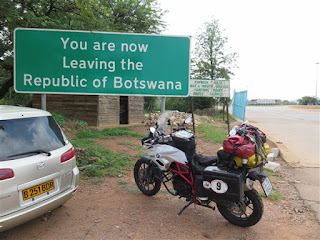 The team’s next part of Stage Three was to exit Botswana and re-enter South Africa where they had to decide on whether to earn extra points in the eyes of some Internet adventure trolls and more riding miles offset by losing days to secure visas for entering Mozambique and possibly entering Zimbabwe and Zambia.

While pondering a routing decision, Dr. G said, “Try to filter out the nice photos and glowing descriptions those lying smart phones of yours have been showing you from the Internet. I’ve been there before and can remember it was far from being in your preferred Marriott hotel in Kansas. ”

Livermore did not want to try crossing the northern part of Botswana, opting for the direct route to South Africa on the busy truck route.  This took the pair away from seeing any of the 80,000 elephants openly wandering the jungles of Botswana, and quickly out of the referenced "Man's Land."

Posted by RTW MOTORCYCLE ADVENTURE RALLY at 3:01 AM