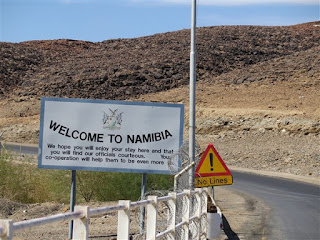 Entering Namibia was fairly simple. The entrants stamped “Out” of South Africa in their passports, then “In” into Namibia.  The paperwork provided by GSA AFRICA www.gsafrica.com in Cape Town gave the Stage Three entrants all that was needed to easily pass through Customs to enter Namibia with the rented BMW F700GSs motorcycles. 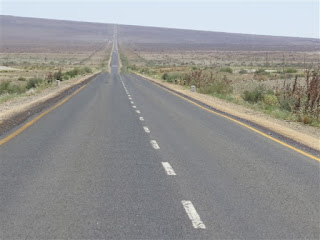 Namibia had some long straight roads as pictured above.  They were like some crossing Australia, or through places in Navajo Country, USA.  Roads like this gave # 7 and # 9 time to try and decipher some of the meanings in the Secret Documents, and adjust their soft butts to the hard seats of the F700GSs. 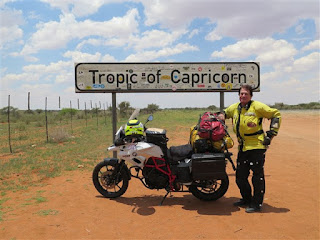 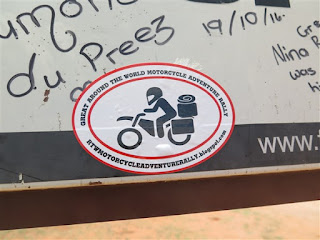 # 9 stood by his long tradition and “stickered” the sign at the Tropic of Capricorn, with the team stickers like a dog leaving its mark on a tree or fire hydrant. He happily admitted to having over 10,000 of his personal stickers and another 500 of The Great Around The World Adventure Rally stuck somewhere around the world over the last 20 years. People often see the stickers and send him an email with a photo of the sticker attached. 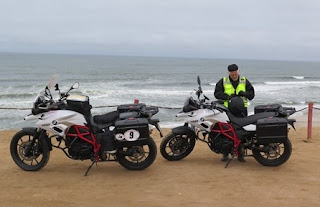 Pictured above was a stop on an Atlantic Ocean beach during a day when the team stored their luggage and did some off-pavement driving through sand and beach areas. Livermore found his needed Internet connection during this lunch stop.

Stage Three of the rally was likened to Sigmund Freud’s stage three, in that it took place during the period of 3-6 years.  Described as the Phallic Stage by Freud, # 7 and # 9 had started their adventure in 2013, and were now in year four, thus it could be extrapolated to be a phallic motorcycle adventure. 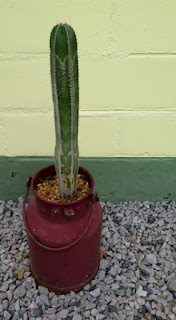 Knowing that Dr. G had authored a book titled MOTORCYCLE SEX or FREUD WOULD NEVER UNDERSTAND THE RELATIONSHIP BETWEEN ME AND MY MOTORCYCLE, the psychotic route planned through Namibia called for a photograph of something phallic, unique to Namibia.  The photo above was phallic, but too far away from the “softness” of the two of the Soft Butt Team to submit. 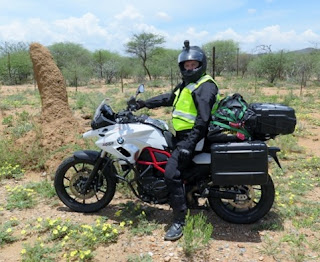 Closer to meeting something resembling a phallus, Livermore was captured in the photo above tagging (but not touching) a phallic looking termite hill in Namibia.

Dr. G was asked how he had managed to maintain his patience, earlier in South America, likened to that of Job, traveling at a daily pace prescribed by their secret schedule far different from his usual techniques and timings.  He said, “At the end of some days I admit to medicating with the assistance of two beers, my first and last.  The ones in between do not count.  To know when to start my medication I look at my two watches, one set to the local time, our adventure rally venue, and the other set to the time at my recently departed base ½ way around the world from Kansas.  One of the two times tells me it is time in one place or the other to medicate. I call it my Job Time.” 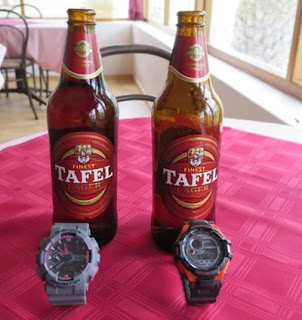 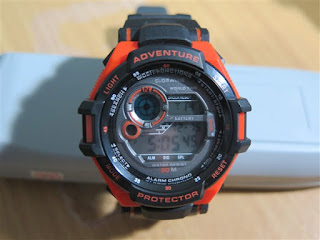 A motorcycle “adventure tour” operator and tour guide about the same time flaunted his G-SHOCK watch, so feeling a need to join his adventure tour guide in having the right time he purchased a second watch, the pink and gray G-SHOCK model shown on the left side of the photo above.  Thinking he had both the real adventure rider look as well as adventure motorcycle tours covered, he wore two watches. His thinking was dashed when he was told, “Nope, you’re missing the ADV sticker on your panniers to be a real ADV rider.”

Crushed, Dr. G took his dashed adventure wannabe ego to the nearest bar, looked at the $3.00 - $4.00 USD watches he had purchased at a street side knock-off booth in Southeast Asia, and decided one of the two had the right time to begin medicating.

When Livermore asked about the safety of riding motorcycles in southern Africa and being exposed to wild animals, Dr. G patiently explained, “You’ll likely see none of the big five outside of a national park, in an enclosed game reserve or stuffed hanging on some wall.  To gain entrance to the parks or game preserves you’ll have to park the motorcycle and take a guided tourist safari in a secure or caged truck or van.  Nearly all of the big five wild animals have been eaten by the local natives, shot by trophy hunters, or killed by cars and trucks.”  Below is a photo of the only lions the pair saw as they reached their exit border crossing out of Namibia. 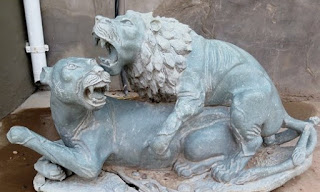 The team’s next leg of Stage Three was to cross the country of Botswana.
Posted by RTW MOTORCYCLE ADVENTURE RALLY at 7:05 AM