Dr. G found for The Soft Butt Team where Livermore could rent two new BMW F700GSs, from GS Africa www.GSAFRICA.com in Cape Town and they outfitted the motorbikes for the third stage of the global rally. Paul Blignaut, the driving force behind the GS Africa company, had been in Dr. G’s global collection of advanced adventure motorcyclists.  He had long been known as a seasoned expert on Southern Africa roads, tracks and motorcycle driving. 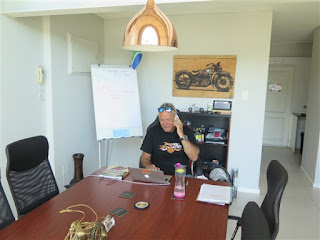 Pictured above was Rally Master Paul Blignaut as he prepared to hand out the “Top Secret” Rider’s Kits to the Soft Butt entrants.  Like another well publicized motorcycle event, the secret routes and timing were supposedly unknown until the night before the official Start, but leaks had sprung like at the other event, and # 7 and # 9 were only needing to confirm details in their secret packets. 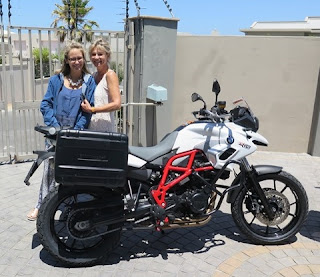 The photo above shows the technical inspectors, Candi-Lee (left) and Petreaux (right), after they had completed a detailed inspection of the entrant motorcycles.

Soft Butt # 9 wanted to install an inflatable seat cushion, saying, “We’re not the world’s toughest riders, not even close.  I didn’t have my buddy bend me over a log and whack me on the butt with a 2 x 4 three times a day before the event to prep my back end, so I want to install a wise man’s aftermarket accessory I acquired from the Aerostich Company www.aerostich.com The technical inspectors allowed the installation because it did not scratch or otherwise change the original BMW on a permanent basis. 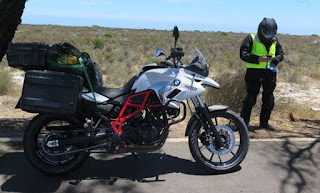 Of the team, #7, Livermore, as seen above, had the technical ability and psychological need to keep tethered to the Internet and his new wife throughout the rally.  He could also receive weather reports, book pit stops well in advance and even call his numerous family members and friends 24/7 to report on his well being. At this stop he said, "It shows hot and dry where we are."

Dr. G looked skyward and at the sunny desert surrounding them, then wet his index finger, held it up, and proclaimed, "Tell your Facebook friends there is no wind either."

#9, Dr. G, had severed his need for constant Internet connections and said, “I’ve got my followers trained not to expect daily or weekly reports, except for Mr. Garfield, the cat. But as long as Garfield gets his daily ration of food and can catch an occasional rat or mouse, he doesn’t need me to sleep well. I left him with enough food and neighborhood mice for several months.” 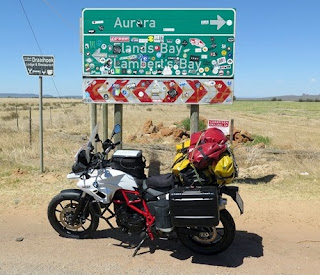 As proof of having tagged a position, The Soft Butt Team placed two of their team stickers on the above photographed sign.  A digital camera recorded their tagging the point. 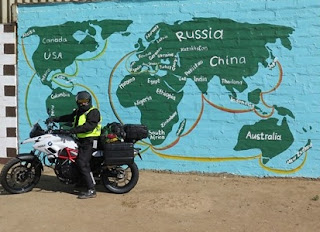 #7 finds the painting of the globe (above) needed to physically record their being where they were.

The team’s next destination after leaving the Western Cape of the Republic of South Africa was Namibia.
Posted by RTW MOTORCYCLE ADVENTURE RALLY at 11:43 PM